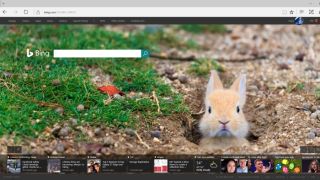 Microsoft is a company best known for its most successful products – in the consumer world that's Windows and Office, and in the enterprise world it's both of those along with Azure, SharePoint, and so on and so forth. But there is one Microsoft product that has been quietly accelerating over the previous years and is now a real asset within the computing giant.

That product is Bing, the search engine that launched in 2009.

The launch date – just seven years ago – is one of the reasons that Bing's market share is so impressive. The search engine market is, by and large, dominated by Google in the West. The company regularly captures around 65% to 70% of all searches, especially in the UK and US.

Bing, meanwhile, snagged around 20% of all searches in the US in 2015, according to Comscore. The figure may be a third of what Google achieves – and has declined a little over the past few years – but for an offering that's just another product in a big company's line-up, it's impressive.

It's all about the data

But it's not the numbers that really concern Microsoft, a company that is willing to support a smartphone operating system used by less than 1% of the total market. No, it's the data that can be gleaned from the service that is of real interest.

Bing powers Cortana, for example, which means that millions and millions of Windows 10 users are interacting with the assistant every day. All of these interactions are then anonymised, pooled, and processed to hone the responses. Just as Google does with search, Microsoft can learn what people are asking, how they are asking it, and the best response to the question.

This idea of big data – a buzzword in the technology industry that essentially means figuring out answers from a large, usually anonymous dataset – is a core part of what Microsoft does and that is what makes Bing so valuable.

There have been calls over the years for Microsoft to sell Bing or shut it down, but the company has held fast beyond selling off some strategic mapping assets to Uber.

"I see [Bing] as a pretty fundamental technology for the company, even for its Office business, it's a very, very core business," Bill Gates, the founder of Microsoft, said in an interview outlining why the company would be foolish to part ways with the service.

"We're thinking about 'are there pieces that are separable,' but for our basic research, including the stuff that goes into Bing, I can't see that making sense to break it off," he concluded.

The Office angle is one of the most interesting and highlights why Microsoft has kept the service around even when it looked like Google was going to own the search engine market.

The 2016 version of Office has several features that use Bing, including Cortana – which has been built directly into the software – and other in-app utilities, like Smart Lookup.

But it's the future versions of Office that Bing will really augment and this has already started with features like Delve. Essentially, Delve surfaces relevant information to you – emails, calendar appointments, contacts – just when you need them by learning what you do, how you do it, and so on.

Bing, and the technology Microsoft has built from and around it, are key parts of this data crunching and show how the company is utilising the service beyond just simple text-based searches.