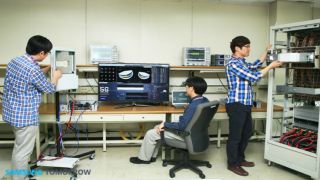 The ability to download HD films instantly could be an everyday thing for South Korean mobile users in 2020.

South Korea's Ministry of Education, Science and Technology (MEST) has revealed that it will be investing £900 million ($1.5 billion, AU$1.7 billion) to develop a 5G network around 1,000 times faster than 4G LTE.

Excited customers will have to wait a few years though as the country plans to roll out trials of the service in 2017 with a commercial edition of the network available by 2020. Key features are also in development according to MEST, including Ultra-HD streaming and even hologram transmission.

The South Korean government estimates that sales for industries using 5G infrastructure could reach up to £187 billion ($310 billion, AU$354 billion) by 2026. According to the plan, telecoms operators, including Samsung, will be asked for cooperation in the project.

Samsung performed 5G tests itself in May last year, claiming to have produced a 1Gbps signal. Like MEST, it hopes to have it available in 2020.

South Korea isn't the only region looking towards 5G. Chinese hardware firm Huawei announced last year that it would be investing heavily into the future tech while the EU, in its Digital Agenda for Europe, marked its plans to enable the continent to be 5G ready by the year 2020 as well.

In the UK communications watchdog Ofcom announced that though it was trialling white space networking and had discovered a number of potential bands for improved mobile broadband in the future, 5G would probably not be possible in the country until at least 2018.