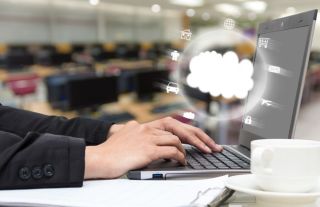 Cloud computing services are becoming increasingly mainstream and are fast establishing themselves as an integral part of every organization's IT strategy. Many industry analysts firmly believe that cloud will become a major platform for growth for all organizations, and especially mid-market businesses.

This is because, previously, if an organization wanted to get a new idea off the ground, they would often have had to make a significant upfront investment in IT before they even knew if their business idea was going to work. The cloud, however, levels the playing field.

When used effectively, cloud takes away barriers to entry and makes technology available to all organizations, regardless of size. From day one, a business can ramp up very quickly and easily without having to make serious up-front capital investment.

The move to the cloud is seamless. Costs are predicable. There are no big step changes or spikes in costs for maintenance or renewal requirements. Remote working and disaster recovery can also be built in.

However, because of this rapid growth and evolution, it could be argued that the definition of cloud has become somewhat unclear. Today, the term is used for everything from physical hosting "elsewhere," to Gmail, to almost anything in between.

It seems that the meaning of the cloud is different to different organizations, depending on how it is being used.

Some companies view cloud as anything stored or accessed from anywhere that isn't "actually here on this very piece of hardware." To the average consumer, most view cloud as the Internet. To them Gmail, YouTube and Pinterest are all in the cloud.

However, pressed further, I think they would cite cloud backup, for example, as "real cloud". To business users, business apps are actually the cloud. They see marketing apps like Marketo, Eloqua and Hubspot all the cloud. Some may also cite web hosting.

To an infrastructure user, cloud is a place to get external resources (CPU, RAM, storage) which can scale up or down. Some clouds may include varying amounts of software. Usually infrastructure people draw a line between SaaS and cloud, unlike with PaaS which is currently being described as one of the fastest growing areas of all cloud computing services.

For example, analyst firm Gartner estimates a steep rise in PaaS adoption and forecasts an increase in spending to more than $2.9 billion (£1.7 billion) by 2016.

In the midst of all this uncertainty, one thing all users believe and fear is that once something is in the cloud it is completely out of their control. This misconception is the reason that many large enterprises and government organizations only use the cloud for testing and development.

Data is brought back in-house when the IT project is ready to go into live production. Equally, many organizations have data sovereignty issues (i.e. they cannot permit their data to reside on services outside the EU), which limits the extent to which they can utilize cloud services.

Naturally, once something is uploaded to a sharing site, a great deal of control is lost.

Read more: Public, private, hybrid: Which cloud is best for your business?

But this doesn't have to be the case for IT systems, as some cloud service providers are evolving to address this concern.

If a workload is hosted in the cloud with a cloud service provider, users should be able to define the actual location of that workload so it can be as close to home as they'd like or further away for disaster recovery purposes. It's important for companies to look for a provider that offers this level of control.

This control is also important because governments are still defining their laws regarding jurisdiction and access to data in their territory, and many organizations have preferences regarding which country they'd like to inhabit.

If workloads can be sent flying around across national borders, users have lost a great deal of control over their own fate, and that of the data, which can be a costly trade-off. Check the fine print of your cloud service provider agreement.

No matter what their organization's definition of the cloud, users need to select infrastructure providers that are able to make it usable to the everyday business, while addressing regional data sovereignty issues.