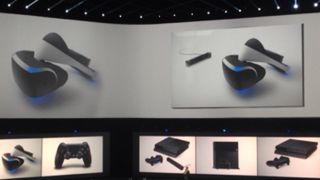 It was mentioned at least.

We didn't time it, but Sony breezed by the Project Morpheus virtual reality headset during its E3 2014 press conference Monday night.

It was less than many probably hoped it for, to say the least. We didn't find out any new information, such as when it would be commercially available, or other useful tidbits.

The only thing Sony had to share was that two new demos are ready to test out on the E3 show floor.

No details were given on the titles, except their names: Jurassic Encounter and Street Luge, which are pretty self-explanatory.

Revealed at GDC 2014 in March, Sony has been quiet on the Morpheus front since then. However, we expect there've been improvements since we saw the headset last. Check back here for (hopefully) more on Morpheus as E3 gets underway.