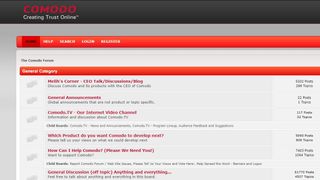 An anonymous researcher recently disclosed a zero-day in the popular internet forum software vBulletin and the cybersecurity firm Comodo has now come out and said that its own forum was hacked.

Ironically enough, news of the hack was disclosed in a forum post that confirmed a hacker had exploited the vulnerability in vBulletin to gain access to the database of the cybersecurity giant's forum.

The vulnerability requires little skill to exploit and an attacker can use it to remotely run malicious code on a vulnerable forum.

However, in this case the attacker used the exploit to steal information, including user names and email addresses, from the user database of Comodo's forum.

Exploit code for the vBulletin vulnerability was released on September 23 and two days later, the company released patches for its forum software.

However, despite claiming that it takes “security very seriously” in its disclosure, Comodo failed to immediately patch its forum software and four days after the patches were released, its forum was hacked.

In its disclosure, Comodo provided more information on exactly what information the attackers behind the hack were able to obtain, saying:

“An unknown attacker exploited the recently discovered vBulletin vulnerability and potentially gained access to the forums database. Our investigations are ongoing to determine what data, if any, has been accessed. User accounts on the forums contain information such as username, name, e-mail address, last IP used to access the forums and if used, potentially some social media usernames in very limited situations. All user passwords in the database were stored encrypted. Comodo forums currently have approximately 245,000 registered users.”

There have certainly been more severe data breaches but this one is particularly embarrassing given that as a cybersecurity company, Comodo should have known better than to put off installing the latest security patches.