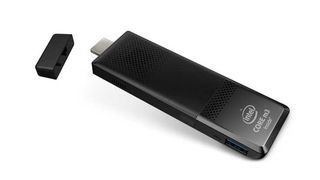 PC sales are looking bleak right now coming off the back of a historic slump in the final quarter of last year, and rather negative predictions for this year, but it's not all doom and gloom – certainly some more niche devices are set to swim against this tide, and apparently one of those will be the humble PC-on-a-stick.

These are devices like Intel's Compute Stick, the Asus Chromebit, and many other efforts from more minor vendors which started popping up later on last year – essentially they're dongle PCs which you simply plug into the HDMI port of any display, and you've got a fully functioning computer just like that (though you'll also need a keyboard and mouse, of course).

These hugely portable marvels of computing are surprisingly powerful these days, and are all set for a rapid gain in popularity according to figures from ABI Research.

ABI reckons that stick PC shipments will hit 5 million units by the year 2021, from the relatively small numbers they're selling now – the company didn't actually provide a figure for 2015, because obviously enough at this stage it's likely to be pretty low, but then it's early days for dongle PCs.

Still, it certainly feels like something is happening with these devices, purely going on the amount of the things popping up in recent times, like the MagicStick and Quanta NH2 to name a couple of the efforts outside of the likes of Intel.

Jeff Orr, research director at ABI, told PC World that the PC-on-a-stick will become more attractive as the prices of desktop computers and laptops rise. Certainly a major plus point with these stick computers is that some of them are very cheap indeed. Convenience is of course the other major boon, as you can slip these in your pocket and take them anywhere.

As well as stick PCs, convertible PCs (2-in-1 machines) are also going against the grain of the overall PC industry decline, and sales of hybrids are expected to pick up considerably this year.