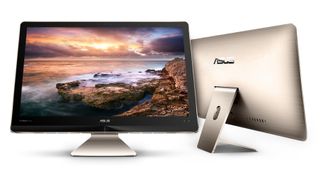 Over at IFA in Berlin, Asus has revealed the full details of its new Zen AiO S all-in-one, and the pricing for this stylish looking PC which bears an ever so slight resemblance to a certain Apple computer.

There are two variants of this all-aluminium 24-inch machine, both of which run the latest Intel Skylake processors. As The Verge spotted, one model will start at €1099 (around £810, or $1230) and will come with an Intel Core i5-6400T processor, 8GB of RAM, along with 1TB of storage and a GeForce GTX 950M mobile graphics solution.

The ports available include the new USB 3.1 Type-C connector, and 802.11ac Wi-Fi is also present. Naturally, Windows 10 is on board.

As to when this all-in-one will go on sale, that's still not been announced.

Stick that in your TV

Going from the large and expensive to the small and relatively cheap, Asus also unveiled the VivoStick PC, a Compute Stick style device powered by a Cherry Trail CPU which runs Windows 10 and you can plug into your HDTV or monitor via the HDMI port.

The idea is you then have a "full PC experience" (albeit a low-powered one) at your fingertips on said display, with connectivity that allows you to hook up a mouse and keyboard – there are two USB ports on board, along with Bluetooth 4.0, 802.11n Wi-Fi and an audio output jack.

And of course you can take this portable little gadget anywhere with ease – the device's dimensions are 138 x 34 x 15mm and it weighs 68g – to allow you to share content with others.