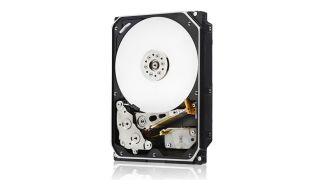 Western Digital has announced the shipping of the new HGST Ultrastar He10, which is the world's first ever 10TB PMR (perpendicular magnetic recording) hard disk drive.

This is WDC's third-gen helium drive, offering 2TB more space than the biggest disk (8TB) of the previous generation managed. It will be available as a standalone drive or as part of HGST's Active Archive System.

These massive capacity drives are aimed at the data centre and enterprise usage, driving forward public and private cloud solutions, but will have an impact for consumers too, in terms of the likes of Netflix being able to swiftly build up capacity and keep streaming movies to end users smoothly.

10TB disks will also help in the battle against the tide of big data – set to surge as more devices come online creating more data, from new smartphones to Internet of Things devices – which threatens to engulf businesses. As we've discussed before, the world is effectively running out of data storage space.

Of course, size isn't everything, but these drives are also designed to perform in terms of reliability and power efficiency. The Ultrastar He10 boasts a 2.5 million mean-time-between-failures rating, which is claimed as the highest reliability rating of all current drives, and it's backed by a five-year warranty as you would expect from a disk of this class.

This helium drive also uses 56% less watts per TB than a traditional air-filled hard disk, so certainly doesn't disappoint in the efficiency stakes.