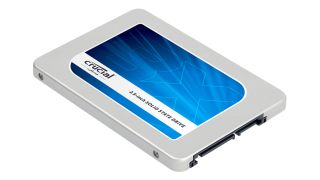 Crucial has revealed its new BX200 SSD, a 2.5-inch drive which is aimed at consumers and SMBs.

The SSD comes in three capacities: 240GB, 480GB and a 960GB offering for those who really need space as well as speed.

The company further notes the drive's energy efficiency compared to a spinning hard disk, with the BX200 being 40 times more energy-efficient when they tested the 960GB model against a 1TB Western Digital Caviar Blue traditional hard drive.

The BX200 also uses a Silicon Motion SM2256 controller, and Robert Fan, VP and general manager of Silicon Motion US, commented: "We are excited about our latest partnership with Crucial on the new BX200 SSD. Our high-performance and low power consumption SM2256 controller combined with Micron 16nm TLC NAND helps make the BX200 reliable, fast, energy efficient and affordable."