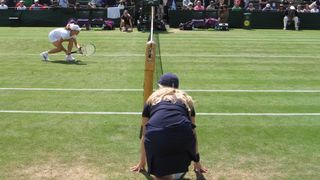 One of the first tennis tournaments to introduce the Hawk-Eye ball tracking system back in 2007, Wimbledon isn't afraid of using tech to ramp up the accuracy and excitement of the game.

But according to IBM, which has worked with The Championships on its revamped mobile apps for this year's tournament, tennis may always require the human touch (rather than computers) when it comes to logging the multitude of lobs, aces, and other incidents that make up the statistical analysis of each match.

Currently, a team of 48 IBM analysts capture data in real-time, which is then used to create graphics for televised and online coverage.

Speaking at the launch of the new apps, Sam Seddon, Wimbledon Client & Program Executive for IBM, said: "There are solutions out there that tennis clubs can buy, but we've not gone down that route as there's a data quality point of view that means some calls - such as calling whether something is forced or unforced - can be subjective.

"We have definitions that we agree within the club which we document and circulate so people know what we're referring to, but having somebody by the side of the court seeing whether something's clipped the racket or bounced in a slightly strange way is good for tennis and assures you get the right information.

"We wouldn't rule it out [computers performing the analysis] in the future, but I can't see it here for the next couple of years."

IBM has contributed a number of new technologies to help Wimbledon revamp this year's iPhone, iPad and Android apps, which provide access to live scores, results, news, blogs, photos and videos and can now be arranged as personalised feeds.

Additionally, a redesigned SlamTracker interface combines historical and real-time data to identify indicators that are likely to affect players' performances.