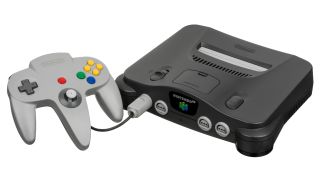 The Nintendo of today is characterised by its risk-taking, innovative take on gaming norms. From the motion-sensing Wii to the multi-purpose Nintendo Switch, Nintendo is now seen as the most creative of gaming hardware manufacturers, even when (as with the Wii U) that audacity backfires.

You can trace that risk-taking attitude back to 1995’s Nintendo 64, aka the N64. Having been burnt by Sony’s unexpected and meteoric gaming rise with the PlayStation, the N64 had to knock it out of the park.

While it never achieved the runaway success of the original PlayStation, its killer games and laser focus on multiplayer play made it one of the most well-loved gaming consoles of the last twenty years.

As such, it still resonates today – when we asked you to vote for your pick of the best ever games console, you came out swinging in support of the Nintendo 64, seeing it rightly earn a place among the greatest games machines of all time.

The groundbreaking ideas the N64 supported were visible from the moment you picked up its insane “trident” controller. To this day, it looks like nothing else in the world of gaming, with its three-pronged shape allowing you to grip the pad in a number of ways.

But it was that analogue stick at its heart that was to be the true key to the revolution that Nintendo was unlocking. For, while consoles like the PlayStation and Sega Saturn had dabbled in fully 3D polygonal gaming, each was still resting on digital directional pads for controlling movement. Having trailblazed that particular tech way back with the 80s’ NES, Nintendo was pushing forward with a bold new idea – emulated 360-degree movement, with a stick that supported minute, intuitive, pressure-sensitive adjustments for pinpoint accuracy.

It was a killer piece of tech, but it needed killer software to show it off with. And Nintendo had the perfect system-seller up its sleeve – Super Mario 64.

It’s hard to explain just how mind-blowing Super Mario 64 was upon its unveiling, in this age of the 4K open world adventures. But the world had seen nothing like Super Mario 64 upon the N64’s June 1996 release. Here was Mario’s Mushroom Kingdom, rendered in full 3D, ready to be explored with an unparalleled level of accuracy thanks to the analogue stick.

Mario could turn on a dime, sprint with an extended lean of the analogue stick, and even pull of backflips and triple jumps with some well-executed button acrobatics. While some modern games still struggle with 3D camera movement, Mario 64 almost nailed it straight off the bat, keeping Mario in sight even when pulling off his most audacious moves.

To crown it all off, by collecting the right in-game hats, Mario could fly. Not only did this showcase the minutiae of control on offer, but it offered a bird's eye view of the gigantic 3D playgrounds Nintendo had created. This was digitised freedom on a glorious scale.

It’s a testament to Nintendo’s skill that this worked at all – moving Mario from his 2D safe space into a bold 3D direction didn’t necessarily have to work – just look at the mess Sega made of its 3D Sonic games. Pick up an N64 and Super Mario 64 today, and it’s as fun as the first time it was committed to cartridge.

You’ve got this great controller, so why limit yourself to just one or two in use at a time? The SNES, PlayStation and Mega Drive may have each had some form of multi-tap add-on, but the N64 was the first to make party play an integral part of the experience. The Nintendo 64 had not one, not two, but four front-mounted controller ports for its wired pads.

Hours were spent in splitscreen Mario Kart 64 four-player head-to-head championships, and gunslinging GoldenEye shootouts with a gang of pals. Super Smash Bros would never have spawned the madcap must-play Nintendo franchise it is today if the beat-em up didn’t first cut its teeth in 4-player N64 brawls, while the console played host to the, quite literal, Mario Party, a 4-player minigame menagerie that cemented the console as the go-to system for multiplayer.

The N64 wasn’t without its problems. Compared to the competition, it lacked third-party support (an issue that modern Nintendo still contends with), leading to a relatively paltry 296 games, total, being released in North America.

Attempts to extend the consoles lifespan with add-on accessories like the Expansion Pack and 64DD, both souping up the console’s innards, fell flat too. In some ways, it was the machine where Nintendo’s living room dominance was first questioned.

It’s hard to think of a machine with a greater impact on modern gaming, if only for that analogue control scheme. Whether you were swinging Bowser by the tail in Super Mario 64, uncovering the secrets of The Legend of Zelda: Ocarina of Time’s Lost Woods or simply laying the smackdown on Kirby in a four-way Smash Bros. bout, the Nintendo 64 created timeless gaming memories for all who laid their hands on it.

Mario’s first 3D adventure is a blast to play even to this day. Taking on Bowser through the magical paintings of Peach’s castle, there are worlds full of secrets to explore, and the perfect realisation of Mario’s 2D adventures in a whole new dimension. If you can’t track down an N64 and a copy of the game, you might have more luck digging out the actually-quite-good Nintendo DS remake, which comes complete with playable Luigi, Wario and Yoshi characters and a host of minigames – though it suffers for the handheld’s lack of an analogue stick. Alternatively the game has seen numerous releases across the Wii and Wii U's Virtual Consoles if you want to experience it on the big screen.

The Legend of Zelda: Ocarina of Time

Until the recent release of The Legend of Zelda: Breath of the Wild, the N64’s Ocarina of Time was unarguably the series’ highpoint – and in some respects, so it will remain. For where Breath of the Wild takes the series in a bold new open-world direction, Ocarina is the perfection of Zelda’s lock-and-key, interlocking item and puzzle systems.

It’s a fantastic fairy tale quest, with time travel, memorable characters, elaborate dungeons and enough secrets to keep you hooked for weeks. A recent Nintendo 3DS re-release touches up the visuals and gives you-on-the-go play, and is well worth revisiting, even for N64 purists.

If you play as Oddjob in GoldenEye on the N64, you’re banned from playing in the TechRadar office. The first great FPS on consoles, it had a fantastic James Bond story mode with plenty of optional challenges and unlockables, and frenetic 4-way split screen action. And that’s where Oddjob came in – the classic Bond villain was a full head shorter than all other multiplayer characters, making him considerably more difficult to hit. It was institutionalised cheating on the part of developers Rare (and a great trick to ensure a win against first-time players!).