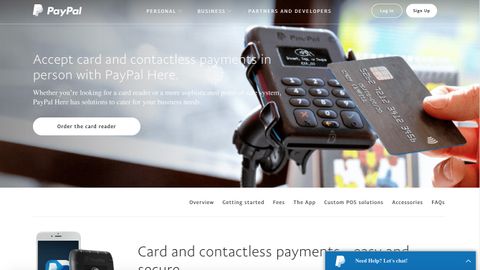 PayPal Here is an attractive proposition for any small business that enjoys the convenience of using a large company with a solid infrastructure, but the costs and some quirks might not work for everyone.

PayPal Here is, as the name suggests, a very of-the-moment creation which has been introduced by PayPal and is a payment processing solution that is comprised of a card reader and supporting app. While it stacks up fairly nicely alongside other players, such as iZettle (curiously, now owned by PayPal no less) and SumUp, it does have one or two limitations.

Oddly enough, one of the weaknesses that we can see is the less than copious array of cards it can support compared to the competition, although the main brands are accepted.

The PayPal Here box of tricks includes a slightly bulky card reader, while the app is a rather more pleasing experience. In fact, this emulates a typical not to mention traditional POS system to great effect, and has the benefit of a tipping feature.

You’d think a big company like PayPal would know how to structure its pricing well enough to lure in lots of new customers. However, while the apparent simplicity of no monthly fee appeals, the offputting part of PayPal Here is the convoluted way its charges are organized.

You might be able to wangle a free card reader depending on what deal is going on at any given time, though it officially retails for £45 plus VAT. For Visa and Mastercard chip or contactless payments you’ll be charged 2.75%. Chip and contactless American Express payments are charged at 2.75%.

Meanwhile, Visa, Mastercard and American Express payments that need to be processed using manual entry methods or swiping will incur a transaction charge of £3.40%, plus a curious 20 pence extra on top of that. Adding an extra twist is the way foreign cards incur fees of different amounts.

On top of that strange cocktail of costs there’s another twist in that everything depends on volumes of sales and more besides. The PayPal Here website needs to be scrutinized carefully before you can really understand it.

PayPal Here does offer support for most of the major cards out there, including Visa, Visa Electron, Mastercard, Maestro and American Express. However, rivals are able to offer more than that, which might be offputting to some business owners.

Similarly, PayPal Here misses out Samsung Pay when it comes to contactless acceptance, although does support contactless, Apple Pay and Google Pay. Nevertheless, processed payments go directly to your PayPal account while funds to bank accounts after using the service can take hours or indeed days to reach your business.

The good news is that PayPal Here is easy to sign up for and doesn't have any monthly overheads, so you really only pay transaction fees.

Full marks have to go to PayPal Here’s developers for producing an app that works really well. It’s a nice looking thing, and the interface allows for many different features and functions, all of which seem to work well together. Indeed, you’ll find that it’s possible to squeeze all sorts out of this application, with the aforementioned tipping feature an impressive consideration.

The way it works in tandem with your PayPal account makes it all the more practical, plus there’s also support for Vend EPOS if you’re running something like a retail store alongside an online outlet.

As regards the card reader then that’s a straightforward and rather workmanlike unit that gets the job done in a basic but more than acceptable fashion. Anyone needing good old-fashioned printed receipts will be glad to hear you can mate the reader with supporting units.

PayPal Here’s card reader is a beefy little unit that looks and feels like it’s been designed for people who aren't sure what they're doing. In some ways that’s a good thing as the buttons are easy to press and the display is basic, but nice and obvious.

In that respect PayPal Here is nothing if not beginner friendly. Once you’ve got yourself the card reader you’ll need to download the supporting app, which unsurprisingly is available for iOS hardware such as the iPhone or iPad, as well as Android devices too. You’ll then need to connect or pair the chip and PIN reader with your mobile device using dependable Bluetooth.

It should be noted that there are issues with a few phone models too, some Samsung models for example, and Windows phones are out too. So be sure to check the PayPal Here website for compatibility issues before you commit.

Customer support it available for PayPal Here customers, but if you’ve spent any time using PayPal itself before now and run into problems then you might be worried just how good this will be.

As is the case with many large companies, support can often fall by the wayside or leave a bad taste when problems don't get handled as they should.

Nevertheless, PayPal Here does indicate that you can get in touch with their support staff, either by email or on the phone, with available hours from 8am to 8.30pm Monday to Saturday and from 9am to 8.30pm on Sundays.

PayPal Here should be one of the leading lights of the mobile payment world, but rather surprisingly it comes across as slightly confusing and a little bit muddled. If you’re already in bed with PayPal then there is plenty to like though.

But, it's really the pricing that seems to be way more complicated than it needs to be, and this could be a factor that will put many off using it. On top of that there is the fact that it accepts fewer card brands. While the card reader itself has been nicely put together, and the app shines in many ways too, PayPal Here needs a little bit of a rethink before it’ll become top of the tree.

It’s getting there, but the next edition will really need to knock it out of the park before it can beat rivals like iZettle and SumUp.