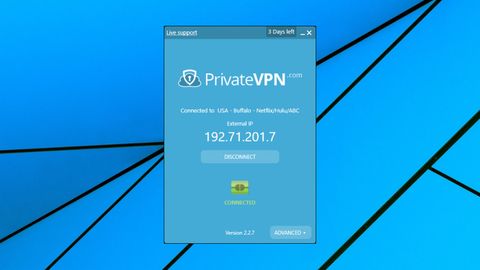 PrivateVPN isn't as fast or as powerful as some, but could be worth a look if you'll use its advanced tweaks and settings.

PrivateVPN is a Swedish VPN service which is basic in some areas, but also has many interesting and unusual features.

The network is relatively small, with 59 countries and 'over 100 servers' (the biggest providers have thousands.)

But torrents are supported everywhere, and you get easy-to-use clients for Windows, Mac, iOS and Android, as well as setup instructions for routers, Linux and more.

The company scores for its technical features, including OpenVPN, L2TP and IVEv2 support, port forwarding, a kill switch, IPv6 leak protection and the ability to connect up to 6 devices simultaneously.

PrivateVPN states that it doesn't outsource support, and when you have problems, you talk directly to the developers. What's more, if you still can't get the service working, the company offers a free TeamViewer-based remote setup service to get you started.

Does PrivateVPN keep any logs? The website seems emphatic: "Our Swedish privacy laws mean there’s NO traffic logs kept to be seized by governments. Unlike many other VPN providers, even WE don’t know what you’re doing online."

That doesn't rule out logging session traffic, of course: connection times, bandwidth, maybe IPs. As PrivateVPN imposes a six-device limit it presumably maintains a list of user sessions, but we could find nothing about that on the site. That's a pity, but it's not unusual, and as PrivateVPN is based in privacy-conscious Sweden we suspect any details will be relatively safe.

We emailed PrivateVPN, asked for a trial code and had a reply in around 30 minutes. You may not see that kind of speed if you ask a tricky technical question, but it's good to know someone is listening.

The code came in the form of a link. We clicked this, were asked to enter our email address, and were directed to the support website. By default, this displayed setup details related to us (Windows client download, manual setup guides), but there were also sections for macOS, iOS, Android, routers, Linux and more.

The Windows client opened with the usual Connect button and a list of locations. Unusually, the default server was Sweden, rather than the nearest location for us. You can change this default to whatever you like, but unfortunately, there's no 'automatic' or 'connect to the nearest server' option.

The location list is a plain list of cities and countries, with no sorting or filtering, no search box, no favorites system, no ping times or server load figures to help you make smarter choices. This could be a hassle, as for instance there are 7 UK servers and 13 in the US, and right now you must scroll down to find and reconnect to your favorites.

Connections are quick, and the client uses desktop notifications to let you know when it connects and disconnects, as well as displaying your new IP on its interface. But there's a small usability disappointment: you can't select and switch to a new server until you've closed the current connection.

A Settings panel is the most interesting feature, with options to change protocol and connection type (TCP/ UDP, ports), encryption algorithm, stop DNS and IPv6 leaks, bypass VPN blocking (maybe) with a Stealth setting, enable a kill switch, and as a second layer of defense, optionally close specified programs if the VPN disconnects. It's not the most configurable client we've seen - you can't set up the system to automatically connect when you access specific networks, for example - but it's better than many.

VPN providers will often boast they can give you access to geo-blocked content, while not giving you any specifics on the services they support. PrivateVPN is much more up-front, with its Windows clients highlighting the best servers to use for Netflix, Sky, Hulu, Amazon Prime and more.

We normally begin our unblocking tests by checking out BBC iPlayer. The client didn't mention iPlayer as a supported service, so we wondered if there would be problems on this front, but no – it was accessible from two of PrivateVPN’s seven UK servers, as well as one in Argentina (we’re not kidding).

Everything was fine with US YouTube, which allowed us in immediately from every US server. Okay, so does almost every other VPN we've tried, but this did confirm PrivateVPN was working as expected.

More importantly, PrivateVPN got us instant Netflix access with the two servers recommended by the client. The company told us that it supported many more regions, too. We didn’t test these, but you can read more on PrivateVPN's Netflix page.

This isn’t just about Netflix, or iPlayer, or YouTube – the client also highlights servers covering Hulu, ABC and more. We didn't test these, but our iPlayer and Netflix success is a very good sign, and if you're looking for website unblocking then PrivateVPN is clearly worth a try.

Our speed tests found that PrivateVPN's real-world performance was acceptable, though a little inconsistent at times. UK speeds ranged from 45 to 60Mbps on our 75Mbps connection, for instance, depending on the server we selected. Maybe the slowest servers were just busy during our tests, but if the client had a means of choosing the best server automatically, that could also help.

The good news is that UK to Europe connections didn't get significantly slower, with locations typically ranging from 40 to 60Mbps.

US speeds were average at 20-30Mbps, depending on location. Still, that's enough for most browsing, streaming and light downloading tasks.

Even the longest distance connections couldn't entirely spoil the mood, with UK to Australia links managing a serviceable 10-15Mbps.

Our testing ended on an even more positive note as we ran the usual privacy checks, and found our PrivateVPN connection passed them all: no DNS leaks, no WebRTC issues, every visible IP always correctly tied to our chosen location.

PrivateVPN is an interesting VPN which gives you plenty of features for a very fair price. There are faster VPNs around with more powerful and better designed clients, but PrivateVPN's advanced configuration options, in-house support and Netflix-unblocking mean it's worth taking the trial.