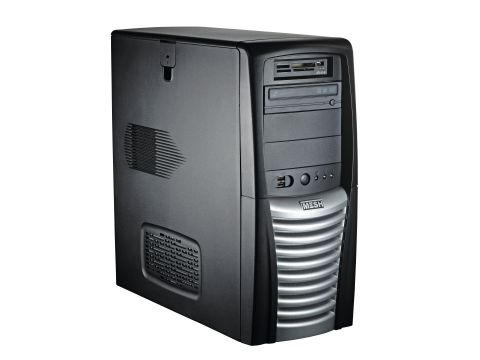 Big brand polish and good performance, but let down by some cheap components

Hardly fashionable or funky, Mesh has done a pretty good job over the years of offering excellent value for money from a UK PC builder. It's a sort of home-grown alternative for those who can't face being just more grist for Dell's mighty mill.

So, while Mesh typically doesn't overtly pander to enthusiasts, what you do get is an extremely professional system with a bespoke chassis that just about lifts it above the hordes of smaller system builders using off-the-shelf parts.

That said, to call it functional with a distinct lack of frippery is about as charitable as we are willing to be about the Xtreme. We'd also point out that the absence of headphone or microphone jacks up front is a bit of a pain, though somewhat offset by a full range of memory-card reading slots.

Still, we can't argue with the core specification: 2GB of memory, a GeForce 8800 GTS in 320MB and a Core 2 Duo E6750 clocked at 2.66GHz puts it at or near the top of the table by most measures. Mesh has also upped the ante with a 500GB hard drive, an item we suspect most owners will rapidly make extremely good use of.

Likewise, the Asus P5N-E SLI motherboard is a nice choice that delivers both 1333MHz CPU support and the ever-tantalising option to drop in a second Nvidia graphics card for dual-GPU SLI gaming.

The net result is some extremely solid, if not quite supertest winning benchmark results. Overall, it trades blows with the PC Specialist Apollo in a fairly even fight for second place.

All is not, however, completely hunky-dory. The HEC power supply may boast a headline figure of 550W, but it's a cheap-looking lump. But the real bummer is the seriously stingy memory spec - a pair of 667MHz Samsung DDR2 DIMMs is not what we were expecting. The system also pumps out more fan noise than we'd like.

As for the default factory software configuration, we're pleased to note that Mesh does not plaster the desktop with superfluous software. Yes, Cyberlink's Power2Go disk authoring suite is present, but it's a reasonably welcome and fairly unobtrusive package.

If we're being really picky, we'd also note that Mesh has chosen to install an NVIDIA graphics driver dating back to April of this year. It's easily remedied, of course, but doesn't exactly scream of attention to detail. There's really no reason for Mesh not to install the newest official driver at the factory.