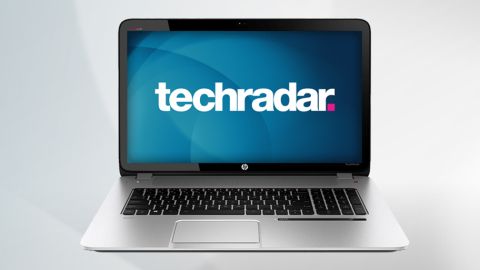 For the price, Leap Motion doesn't add much to this solid build. Look elsewhere for cheaper, comparable laptops.

Though we've been waiting for Minority Report-style interfaces to arrive for years, so far we've been stuck with touchscreens, their infinitely more practical but much less futuristic cousin.

However, with the Leap Motion controller now out and gaining support in applications, we're a step closer. And the HP Envy Leap Motion here is the first laptop with this gesture-based technology built in – you won't find it even in more expensive machines such as the MSI GS70 Stealth or the MacBook Pro 15-inch with Retina display.

It also comes with a regular multi-touch trackpad and a touchscreen, so there is a degree of overkill for control methods, it's true, but the ergonomics of laptops make it kind of a natural fit here. Your hands normally use laptops in the right kind of spots for the Leap Motion – you just need to lift them up off the surface a bit.

The Leap Motion sensor, a black bar on the right of the front, can detect your hand motion across the width of the laptop. You hold your hands over it, about half way up the height of the screen, and you can control compatible apps and games with a wave. The laptop comes with a dedicated app store for Leap Motion software, with some games and drawing tools available immediately.

Interestingly, the HP Envy Leap Motion isn't coasting on its namesake technology, though: being part of the Envy line, the company hasn't skimped on specs.

There's a quad-core Intel Core i7 processor, powerful Nvidia 750M graphics with a near-overkill 4GB of dedicated video memory, and a whopping 12GB of RAM for the system.

It also comes with a 1TB hard drive (no SSD, though) for storage, with Windows 8.1 and the Leap Motion Airspace software for running Leap-enabled apps.

The huge 17.3-inch screen means that this is something of a beast, with a huge footprint and weighing 3.2kg (7.05 pounds) – not the worst we've seen, but the sheer size and heft of the screen means that weight leans heavily towards the hinge, meaning you'll have to be careful when carrying it.

At least the space is being put to good use, with a 1920 x 1080 Full HD screen, and a numberpad alongside the keyboard.

It's all black and silver in appearance, with a black screen, black keys and a solid dark line for the Leap Motion sensor (which also includes a fingerprint scanner, just to pile on the features).

It looks much like all of HP's other high-end stuff recently, such as the Envy TouchSmart 15, and is a fairly handsome machine.

The back of the top panel is devoted to a speaker grille for the Beats Audio speakers, while at the side you'll find four USB 3.0 ports and, almost unusually these days, an optical drive. Blu-ray playback is a go on the big, detailed screen, so this is shaping up to be a media powerhouse.