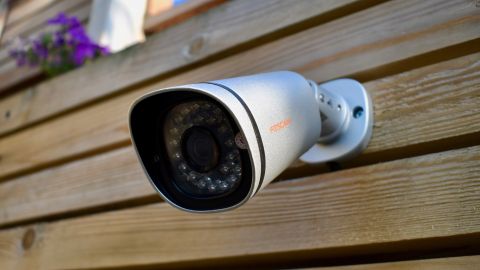 This metal bullet camera is built to last and beams back decent Full HD footage in daylight or darkness. Installation is fiddly and the app is unsophisticated, but good picture and build quality make it worth the effort.

Foscam’s metal bullet camera is designed for outdoor surveillance of small and large properties. Instead of Wi-Fi, it requires an Ethernet connection, which means a more stable connection and a little more time installing it. You might not need to connect the power cable, however, as it’s compatible with PoE (Power over Ethernet).

All of Foscam’s IP cameras are supported by an Android/iOS app that will help you through the rest of the installation, and let you stream live 1080p video to your phone, or receive alerts with an image of the action as an attachment.

The all-metal construction of this sealed camera housing inspires confidence in a product that feels like it will last a long time. To make it harder for intruders to tamper with the device, all the bolts require an Allen key and the microSD card is buried behind the lens cover.

A single cable runs from the camera, and this then divides into separate audio and video dongles, which can be located safely out of sight and reach.

As mentioned, the lens is surrounded by an impressive array of 30 LEDs and it can be angled up or down in its hinged metal bracket. There’s no sideways or rotational movement with this fixing, so placement is critical.

Here are the full specs of the Foscam F19901EP:

As a step up, mid-price model, the F19901EP sports a superior 4-megapixel sensor over the cheaper F19900 and offers a choice of SD, HD and Full HD image quality. Video is automatically recorded to the Foscam cloud, if you take out a subscription, or directly onto a microSD card.

Alerts can be pushed to your phone along with a still image if you so wish. You can set up an account and choose your preferences using either the Foscam app on your phone, or the Foscam portal on a PC or Mac.

The IP66 rating means the sealed casing can withstand rain and operate at temperatures down to minus 10 degrees centigrade, and its PoE certification confirms that you won’t need to plug in the power cable if you already have the right Power over Ethernet equipment in place.

Installation is a little tricky because the bracket only pivots in one direction, but at least the screws are included, and the wide 118-degree field of view will probably cover most of the area you wish to survey anyway.

Syncing the camera with a smartphone should be easy, but it took us many attempts before we discovered that it simply isn’t compatible with a 5GHz network, and we had to find an older router which supported 2.4GHz Wi-Fi.

When the setup wizard finally finishes, you can set up the sensitivity of the motion sensor, set schedules for when you don’t want the camera to be triggered and choose the video quality and so forth. The Foscam app makes all this fairly easy to achieve.

In terms of picture quality, the F19901EP is a cut above the average security camera in this price bracket. 1080p is becoming the norm for IP cameras these days, but some, like the Reolink Argus, still look a little compressed. The Foscam manages better contrast and crisper delineation in daylight and a much better than average performance in the dark. Night-time shots, lit by the 30 IR LEDs, look pretty ghostly, but at least you can usually identify the pale faces. No doubt the wired Ethernet connection also results in a more stable video stream.

The motion sensor is perhaps a little too sensitive, as even on its lowest setting we received a few false alarms. It’s also possible to adjust the schedule for when you wish to receive alerts to avoid being inundated by messages.

The ability to zoom up to 6x is an advantage – at least it is when you are in Full HD mode – and the two-way audio could be useful if you are able to set this up. One feature we missed was the ability to send a still image with an alert – instead, the snapshot is saved on an FTP.