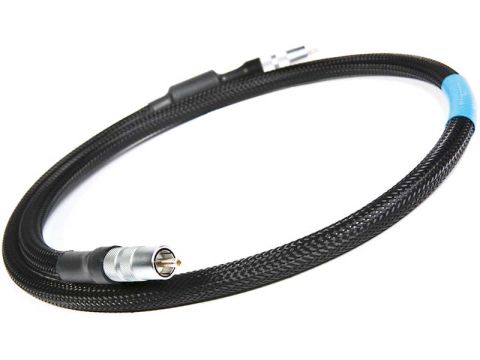 It's always nice to find a product reducing a distortion one didn't know was present. Sound is clear with unusually revealing low frequencies

We dislike carping, so we might as well get a complaint (or at least a concern) about the Merlin Scorpion Digital interconnect cable off our chest at the outset: it's insanely inflexible, and more than capable of levering the guts out of a cheap phono plug.

Decent ones, as fitted to upmarket CD players and DACs, will survive, and that's clearly the kind of market Scorpion is aimed at. That said, it's something of a tweaker's delight.

Not only does it tick all the obvious boxes – chunky 12mm diameter, 'highest grade' conductors (Merlin doesn't claim to have made the basic wire), ferrite noise suppressor and silver-pin phono plugs – it's also cryogenically treated and can optionally be supplied burned in and/ or demagnetised. It can be ordered in any length and with any combination of phono and BNC plugs fitted, a good thought.

It may be that the ferrite has a part to play, because this cable has a sound of its own which we very much like – and, in this case, there seems to be more of that sound in the performance, even with very jitter-immune DACs, pointing the finger at radio frequency interference (RFI) as a possible culprit.

Along with generally neutral tonality in the midrange there's also some very good treble, and we found a slightly 'darker' colour to the low midrange and bass which seemed to make bass melodies stand out a little more than we heard from other cables.

Small amounts of noise and hash in the low-frequency reaches are something one only becomes aware of when they're removed, and that's apparently the case here. Worth the trouble, it seems!