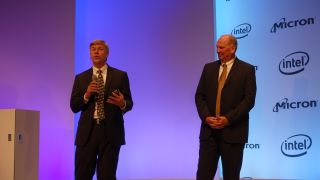 Intel announced that it was teaming up with Micron, another US semiconductor company, to release what could be considered to be a game changing technology, a non-volatile memory technology called 3D Xpoint, the first paradigm shift in memory/storage since the introduction of NAND 25 years ago.

Shares in both companies went up shortly after the announcement (Micron by a whopping 10% and Intel by a more conservative 2%) and brought up a potentially fascinating scenario. We know that at least one company, Chinese behemoth Tsinghua Unigroup, has approached Micron with a potential bid of $23 billion (about £15 billion, AU$31 billion), but given how sensitive the technology Micron is handling is, the US government is unlikely to greenlight the transaction.

Micron's eagerness to explore a potential buyout comes after the company issued a profit warning earlier this month following a softer-than-expected quarter. It could also attract interest from Intel as it seeks to extend its zone of dominance beyond compute.

It showed its financial clout earlier this year when it acquired FPGA maker Altera for nearly $17 billion (about £11 billion, AU$23 billion). Micron is more expensive, currently standing at just under $20 billion (about £13 billion, AU$27 billion), but could fill in a gap that would make of Intel the only end-to-end supplier of compute, storage and network on the market.

That's not unlike Apple which control a lot of its own software and hardware but still has to rely on Intel and Samsung for a lot of its components.

The two companies have been collaborating on a number of innovative technologies over the last decade or so and the new memory technology, the first to be launched in more than 25 years, only serve to exemplify the complementary nature of both companies.

Should Intel acquire Micron, the Santa Clara company would not only inherit an impressive portfolio of patents but also prevent other potential competitors from owning a whole portfolio of promising technologies.

Other than 3D Xpoint, Micron has been working on Automata, a highly parallelized compute engine, Phase Change Memory, 3D NAND, I/O virtualisation and PCIe sharing. Its bread-and-butter products remain DRAM-based, which coincidentally is what Intel needs to become self-sufficient and in a position to provide with entire, self-contained solutions for several key markets (mobile, PC, servers, embedded). Only Samsung, with the possible acquisition of AMD could potential rival an Intel/Micron tie-up.

Acquiring Micron would also allow Intel to accelerate the pace towards a unified architecture that blends compute and memory resources in a seamless way, a goal shared with AMD and to a lesser extent by the HSA consortium.

More importantly though it would allow it to increase its profit margins at a time where other Intel business units are feeling the price pressure from ARM-based competitors and Samsung. Micron remains the missing piece of the puzzle for Intel; the question remains whether someone else will swoop in and trash its party.