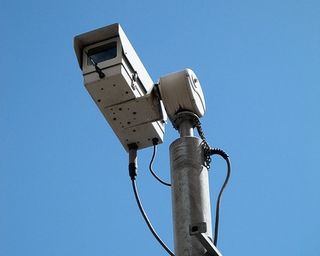 Who needs one of these when you've got an army of snooping insects?

The various current plans to use remote-controlled insects as tiny future spies or – literally – bugs have long had only one thing stopping them becoming reality and that's the problem of powering the cybernetics that control them.

Now, however, that may no longer be an issue, thanks to a Japanese scientist who thinks he has the problem licked.

Keisuke Morishima of Tokyo University of Agriculture and Technology suggests putting tiny piezoelectric fibres on insects to make them generate electricity from their own movements.

Should that prove feasible, there would be no need to glue batteries to the creatures in order to drive the tiny computers that tell them where to go. Sufficiently small batteries typically last just a few minutes at present.

So far, Morishima has generated 10 millivolts from a single 200-micrometre fibre stuck to the back of a hissing cockroach.

He says 100 or so fibres would be enough to create a self-powered insect spy that could run indefinitely and take its surveillance gear wherever its masters desire.