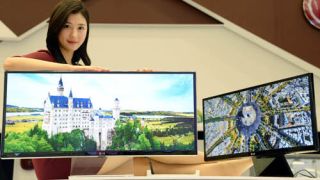 LG will have quite a display show lined up for CES 2014 as today it's announced a number of next-gen monitors primed for the Las Vegas limelight.

The South Korean firm teased in an announcement that it will showcase two UltraWide QHD monitors at CES. The two screens will be 34- and 29- variants of the same UM95 model.

Aside from the shared name, both panels have a QHD 3440 x 1440 resolution and come in an IPS 21:9 UltraWide aspect ratio.

LG noted gamers should take to the new display, though in practice it may not be as quick as gaming enthusiasts like. Movie lovers however will likely appreciate the bolder colors from the IPS monitor and not seeing those black bars, even when watching extremely wide IMAX pictures.

The UM95 should find an audience among graphics professionals, too.

The UM95 will include Thunderbolt 2 connectivity, which offers snappier transfer speeds of up to 20Gbps. LG pointed out users can view and edit original 4K video while backing up the file at the same time with the UM95. The new monitor will also feature DisplayPort 1.2 tech.

In addition to these two monitors, LG is planning to display a 31-inch Real 4K monitor with a pixel-dense 4096 x 2160 resolution at CES.

The 31MU95 features an IPS display, but other than these few specs nothing else is known about the new monitor, including its price.

Filling out LG's CES monitor offerings are a few more IPS 21:9 UltraWides, among them the UM65.

Available in 25-, 29- and 34-inch display sizes the UB65 is described as a workplace model featuring "ergonomic designs ideal for the workplace environment" – which most likely means displays on a rotating hinge for reading really long documents on a UltraWide monitor.

21:9 inch monitors are still a pretty tough sell for the everyday computer user as they're expensive and not ideal for office closets or cubicles. Stay tuned to TechRadar for eyes- and hands-on reviews of these display after we get our peepers on them at CES 2014.