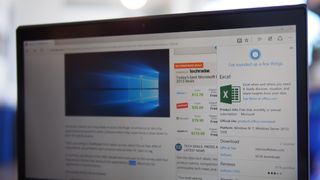 Windows 10's early numbers may have been slightly inflated after one source claimed it has failed to reach as many as 20 million machines.

News site NeoWin claims that its own internal sources have found that Windows 10 has in fact been installed on 18.5 million machines and that the previously reported 67 million figure relates to the amount of machines registered to receive it.

Microsoft's own figures, which were released just hours after the OS' first day in the wild, reported some 14 million installs in the first 24 hours and at its height Windows 10 was being installed on some 1,500 machines a second.

With that level of downloads there have been more than a handful of bugs and errors. However, this is to be expected considering the mammoth undertaking that bringing a new OS to PC users entails.

Still got months and months

Windows 7 and Windows 8.1 PC owners have a full 12 months to take advantage of the free upgrade to Windows 10 and as more people find out about its non-existent price-tag there's sure to be plenty more downloads.

Microsoft has already turned its considerable attention to readying the next major party of the OS launch: Windows 10 for Mobile. We can expect that to land in the next couple of months and begin to try to further erode the lead built up by iOS and Android.