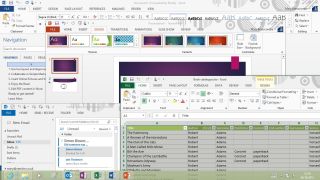 Microsoft has made available Service Pack 1 for the 2013 set of Office products, featuring a variety of stability, security and functionality fixes.

The new update is ready for download from the Microsoft Download Centre. In a blog post, Microsoft writes that the compatibility pack includes fixes for Windows 8.1 and Internet Explorer 11.

High DPI devices and precision touchpads gain support in the pack, while improvements have been made to the Click-to-Run virtualisation tech that updates Office 365. SkyDrive has also been rebranded as OneDrive for business, in line with the company's recent court defeat.

Along with the update pack are a host of improvements and tweaks that have all occurred between Office 2013's release and the release of Service Pack 1.

According to Microsoft's Sustained Engineering Team, the pack has already been deployed to thousands of production mailboxes, giving some companies a head start.

Downloads are available for Office 2013 desktop, Sharepoint 2013 Server and Exchange Server. After 30 days the company will push SP1 as an automatic update through the Microsoft Update Service.