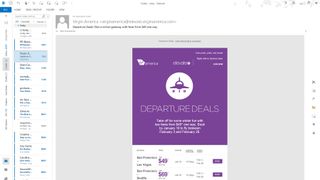 Keeping spam out of your inbox isn't easy – around 99% of all the email messages sent are spam and even if only a few get through, they're annoying and can be dangerous. Those iTunes receipts and PayPal account warnings you weren't expecting are often trying to slip malware onto your system.

But legitimate email you don't actually need to read is also a huge drag on productivity. Whether it's newsletters you didn't sign up for (often known as bacon, because they're tastier than spam) or the endless discussion about where to have the team lunch this week, irrelevant email is why so many employees would rather use social media or messaging services.

Cutting through the Clutter

To stop people abandoning email in frustration, Microsoft launched a new feature called Clutter as part of its Office 365 cloud service, and this files away messages it thinks you don't need to read using machine learning to simulate your world – and what you care about.

"We're trying to address the biggest pain point in email, which is information overload," John Winn of Microsoft Research in Cambridge told us. "This causes the most pain, because when you have so many emails coming in to your inbox it's difficult to focus on the high priority email – the ones that you need to take action on."

The problem is that what's interesting to you might be clutter for me, unlike spam.

"We learn from the signals you provide just by working normally; what messages do you read, what do you reply to, which do you forward? Which are likely to be of interest, actionable or high priority? And messages that aren't any of those can be removed and placed in a 'next door' inbox you can look at any time you want."

It doesn't need a special client the way Gmail's Inbox does, because it just happens in Exchange – and you can look at your normal email and your Clutter-filed mail in any mail client, because it's just a normal folder.

Clutter gets information from the Office graph as well as from the email message itself. It looks at who sent the message, whether it's sent just to you, or if you're only on the CC list, as well as examining the words in the body and subject, and the Office graph tells it how you treated the email – whether you replied to the message or forwarded it, whether you deleted it or moved it to another folder or marked it as unread, and how long you spent reading it.

"We match those signals from the email and your behaviour and we take a fresh email and say, 'what is the likely behaviour? Will you read it urgently or ignore it?'" explained Winn.

Cleverly, Clutter takes into account that you don't always treat email the way you mean to. For a start, it waits up to a week before saying you've ignored a message (because you might just be busier than usual), but if you take an action like replying or deleting, it can take that into account straight away. If you're on holiday and you're treating email differently – not replying to messages that would otherwise be urgent – it models that as well.