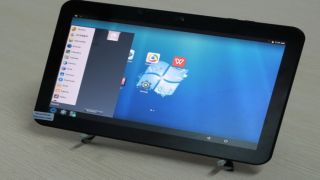 If you've been waiting for your cheap Android tablet to look like a Windows laptop then your time has arrived.

Chinese chip maker Rockchip has developed a modded version of Android 5.1 called Light Work OS that features a Start menu, task bar, the ability to run apps inside individual windows that can be positioned anywhere on the screen and a Windows background that makes you immediately think of Vista.

So far just one tablet will feature the OS. The custom version of the Pipo P9 tablet possesses a Rockchip RK3288 chip, 10.1-inch display with a 1,920 x 1,200 pixel resolution, 2GB of RAM and 32GB of onboard storage, according to Liliputing. This new offering throws an interesting curve ball into the increasingly competitive Windows v Android tablet space.

On one side there are plenty of Windows tabs with Intel Atom chips able to now offer Windows 10 whereas on the other side the ARM-based Android tabs have the upper hand in the app department yet the OS isn't as popular as Windows.

Better than a Surface?

Above all this sits the Microsoft Surface Pro and Surface range that gives an experience that is close enough to a full fledged laptop that the firm pitches it as such and with the power expected inside the new Surface Pro 4 you can understand why.

Where the Light Work OS sits in all this is unclear, though if it becomes a viable option you could see many more Android tablets coming with it as an option in the coming months.