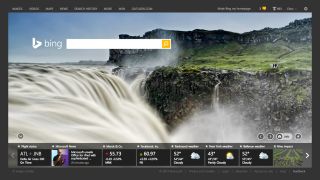 Microsoft has done a lot of sprucing up with Windows 8.1 and Cortana for Windows Phone 8.1. Now the software giant has launched a new version of Bing featuring personalized cards similar to Google Now.

The freshly launched feature is meant to help users keep track of things that matter to them. After setting up some interests, the Bing experience will update with personalized cards news, weather, flights and stocks.

Microsoft says there's still more to come but the cards will automatically update with new information such as stock price changes or whenever your flight is delayed.

Even when users aren't visiting Bing directly, it will also push updates to Microsoft's other Bing-powered services like Cortana and the Bing Sports app.

It all sounds a bit familiar to Google Now but Microsoft promises even more personalization by letting users set their own topics such as their favorite sports teams.

By comparison, Google Now requires no set up and simply works as soon as you start it. Consequentially, however, there are also no deep customization options because it learns everything based off of your search patterns and daily life.

Assuming the new version of Bing also plugs into Cortana seamlessly, Microsoft's digital assistant will attune herself to the user's life and figure out even more interests organically.

Users that want to get started using the new version of Bing can do so by logging in with their Microsoft account. From there users should look inside their settings and pick the new option called "Interests."