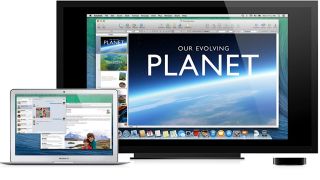 By all accounts, this week's OS X update appears to have fixed a lot of what was ailing Mac users on a number of fronts, but those who use AirPlay to mirror their desktop to an Apple TV may think differently.

The Apple Support Communities forum is seeing an uptick in Mac users complaining about AirPlay Mirroring issues after updating to the latest OS X Mavericks 10.9.2 update.

Although that update has done plenty of good - including patching a nasty SSL bug and squashing several persistent issues with the Mail application - Mac users who rely on AirPlay to mirror or extend their desktops onto an Apple TV feel otherwise.

Based on its own tests, AppleInsider speculated that the problem could be limited to older Mac hardware as the sight saw the issue firsthand on a mid-2011 MacBook Air and third-generation Apple TV.

Judging from posts to the Apple support forum, problems range from the AirPlay Mirroring options vanishing from the menu bar to video-only connections when extending the desktop.

AppleInsider's tests noted "scaling issues on both the Mac and Apple TV, low frame rates, sporadic mouse freezing and video failures" even after performing a hard reset on each piece of hardware as well as the wireless router.

Our own independent test using a mid-2012 MacBook Pro with Retina Display running OS X Mavericks 10.9.2 and a second-generation Apple TV with the latest 6.0.2 software update worked as expected.

Apple has yet to acknowledge the problem, let alone weigh in with a solution, leaving many afflicted Mac owners with semi-functional AirPlay Mirroring for the time being.