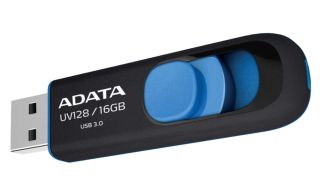 An Adata USB drive, definitely not a 3.1 version.

Taiwanese company Adata will be releasing a number of USB flash drives that will use the brand new USB 3.1 technology (Type C OTG) at CES 2015.

There are no details about the storage capacity, but we can expect Adata to offer anything between 128GB and 1TB models. Adata also mentioned that it will leverage Bluetooth pairing with your smartphone to enable protection at user level by using Bluetooth as an additional security level.

Announced back in July 2013, the new interface promises to deliver up to 10Gbps, twice the transfer rate of USB 3.0 and on par with Intel's Thunderbolt.

Other notable advantages include universal reversible ports (replaces both USB and microUSB) and the ability to deliver up to 100W of power, which should be enough for a laptop and a couple of monitors (like the AOC E1759FWU which uses only 10W).

USB 3.1 will be backward compatible with current USB devices. It will be interesting to find out how swift will the rest of the market adopt USB 3.1 as it seeks to federate both mobile and desktop audiences.