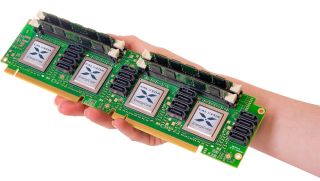 Calxeda was the first on the ARM server market.

Remember Calxeda? This startup was the first one off the blocks with design wins for ARM-ready server chips. It was good enough for HP to adopt it in its first Moonshot server back in 2013. It did come as a shock to a lot of analysts later that year when Calxeda shut down citing a lack of funds.

It was especially ill-timed as the ARM server market was just about to warm up with Broadcom, Qualcomm, AMD, Cavium, Marvell and Applied Micro announcing products or at the very least a definite interest in that sector.

Calxeda IP has been purchased by AtGames Cloud Holdings and its technology revived via one of its subsidiaries, Silver Lining Systems, which has already completed successful proof-of-concept designs.

A spokesperson for the company suggests that products will come in early 2014. AtGames Cloud Holdings which made news when it purchased the assets of popular game streaming service, Gamefly.

AtGames is also known for selling video game consoles based on vintage platforms such as Sega Genesis or even the antiquated ATARI. Interestingly, Foxconn's server group and ARM are partners although it remains unclear who actually owns Calxeda technology and assets.

We will be interviewing Barry Evans, the former CEO of Calxeda soon. So stay tuned for more details.