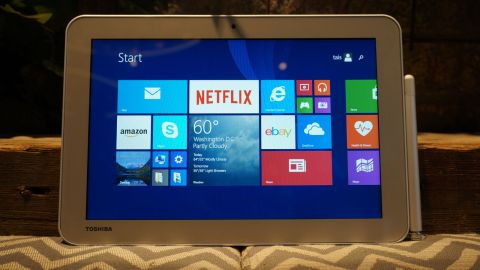 Without its cool stylus tech and writing apps, there's not much else to Toshiba's latest mid-range tablet that, for the price, just isn't competitive.

When Toshiba launched its $149 (about £99, AU$184) Encore 2 running Windows 8.1 with Bing, the direction for the company's Windows slate line was clear: budget buys. But now, with the newly announced Toshiba Encore 2 Write, that direction isn't as obvious.

Either Toshiba has seen great success with its budget-friendly Encore tablets - enough to expand even further - or this is an attempt to reinvigorate the line with a more pro-focused set of devices. Regardless, the Encore 2 Write is here and is all about, well, writing.

Save for a horizontal orientation rather than a vertical one, the Encore 2 Write is essentially identical to its predecessor in its rounded style and champagne-meets-white coloring. However, that TruPen is something entirely different.

Equipped with Wacom Feel stylus technology and software, the TruPen delivers 2,048 levels of pressure sensitivity. I saw this reflect firsthand, with the screen registering increasingly larger lines as I pressed harder on the display with the stylus. Luckily, the stylus sports a clip that tucks into the tablet for easy storage.

Toshiba didn't stop at just making a pen and slapping it on a tablet. The firm created a small app suite revolving around the accessory, namely TruNote. Essentially a Microsoft OneNote competitor, this allows you to summon the app with the press of a button on the stylus - sound familiar?

That's because the Surface Pro 3 did it first. At any rate, users are given tons of options with the TruNote app, like an infinite amount of "notebooks" or individual projects with their own font styles, color palettes and more. You can then search through your notebooks using just handwriting, or even shapes.

TruCapture then allows you to process images of words, other shapes and symbols taken with the tablets 8MP rear shooter into workable files. Need to jot notes from the whiteboard real quick after that meeting? Just snap it with the tablet and you're good. At least that's the idea, and the demo shown during the preview event worked just as advertised.

Finally, TruRecorder allows users to quickly record meetings and revisit them later through the app. Not much else to it than that, I'm afraid.

Stylin' stylus, but those specs…

Like most of its predecessors, the Encore 2 Write leaves something to be desired as far as specs are concerned. Packing an indiscriminate Intel Atom processor, 2GB of RAM and 64GB of storage standard behind a standard HD screen, everything about this tablet's innards are, well, standard.

While that's to be expected for a more affordable tablet, the Encore 2 Write is entering mid-range tablet territory with the likes of the far stronger Google Nexus 7 and iPad mini 2. That said, neither of those slates can match Toshiba's array of inputs.

The Encore 2 Write comes sporting a micro USB port, microSD card slot (up to 128GB) and micro HDMI. Of course, all of that is in addition to Wi-Fi and Bluetooth. (Oh, and don't forget the HD front-facing webcam.)

Unsurprisingly, the Toshiba Encore 2 Write is very much focused on crafting the ultimate tablet writing and drawing experience aimed squarely at professionals and creative folks. However, I'm not sure how wide of an audience there is for a tablet with a stylus.

More importantly, there isn't much that's especially exciting about this tablet. Sure, it has a stylus and lots of cool features to support it, but how crucial are any of these features to the device they live inside much less those using it?

Maybe the Encore 2 Write will take off with the creative crowd given its relatively affordable price tag. But then again, haven't tablet fans with 400 bucks to blow already handed it over (or plan on it) to Apple or Google? The Encore 2 Write hits select stores and Toshiba's website on January 11.