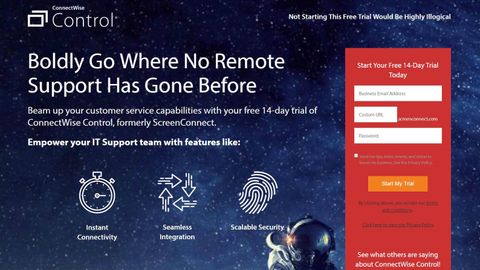 A powerful tool for those wanting to use computers they’re not near. It is ideal for fielding support calls, remote training and many other business scenarios. As it works on many operating systems and has the polish that other apps lack.

Originally this product was called ScreenConnect, and it carved out a successful slice of the remote access market under that name.

However, the company behind ScreenConnect was bought by PSA company ConnectWise in 2015, and in 2017 rebranded it as ConnectWise Control.

What hasn’t changed is that this software is a self-hosted server application designed to provide web-based access to remote clients, inside and outside of a local area network.

Let’s look at the features and see what makes ConnectWise Control the remote access application to use.

Those wanting to explore ConnectWise Control for themselves can download a free 14-day trial from the ConnectWise website.

Once you’ve initiated the trial, an email is sent to the user of the machine you wish to control with a unique code for them to enter.  With the software component installed, that computer will appear in the list of those registered to that account.

All that is required to take control of that remote machine is the installation of the client tool on the administrator's computer, and you can immediately take control.

It didn’t take long for us to realise that ConnectWise Control is a much more sophisticated solution than Windows Remote Desktop and a great many other dedicated applications.

The primary focus of the design is to provide a means for a technician to take over a guests system to install, fix or generally help them.

Therefore, unless you specifically decide to hide what it is you are doing, the screen of the remote session is entirely synchronised with the actions you are performing remotely.

You can lock the guest out from interacting with the machine, or you can allow them to generate input. You can remotely print, send them messages, draw pictures on the screen, and speak to them directly if they have speakers and a microphone.

And, for those especially busy technical staff, you can have more than one session open, controlling and interacting with multiple computers and their different users.

While this software can be used to control unattended servers, it is patently overpowered for that job, with all its subtle abilities to interact with the machine and anyone sat at it.

Once the client/guest relationship has been established, it is possible for the client to take control of the guest machine at any point in the future, assuming it is connected to the Internet. ConnectWise Control even has a ‘Wake’ feature that works with the WOL (Wake-On-LAN) feature that Ethernet adapters usually have, allowing the machine to be powered on remotely for subsequent connection.

Another functionality is a Meeting mode that is accessed via the web interface.

Meeting mode allows a single user to share their screen and actions to others, who can interact with it and communicate with the meeting host.

As a training tool, this is excellent. Although, given the nature of the screen replication process, there are limitations on sharing with others. For example; it wouldn’t be practical to play a game and share that with multiple others with any fluidity.

However, to train others in using a desktop application or to present a new product is entirely feasible.

One curiosity is that the website where you initiate the connection is still called screenconnect.com, two years after the choice to do away with this brand.

And, the final trick of ConnectWise Control is that it can generate the guest components for unattended systems which are then sent via a link, URL or downloaded executable.

Install packages are available for Windows, Mac OS X, Red Hat and Debian Linux, and it can also be used with Android and iOS devices via apps from their respect app stores.

The interface for each session is very simple, and provides the maximum screen space for the remote desktop, with a narrow ribbon of icons above it to access the various controls.

We liked how compact this was, allowing the maximum space to be used for the view of the remote system.

This view, unlike some other remote solutions, isn’t a 1:1 representation of the remote screen, and can be scaled with the window, allowing control of a desktop with a resolution greater than that of the client system or for multiple sessions to be seen at once.

Our impression is that the system has a very clean interface that is easy to follow and learn, and that applies to both the client tool and the screenconnect.com admin web portal.

An interesting addendum to the portal is the ability to add extensions to the basic functionality of the client app. And, at currently ConnectWise has 92 extensions available to the solution.

These provide a wide range of tools to augment the default ones. These can translate languages for messaging with a guess in their native tongue, automatically respond to messages, and so on.

The most useful extensions include those to popular apps and services, such as Outlook, Naverisk, Passportal, Zopim, ITBoost, Zendesk, Slack, ServiceNow, and many more.

And, some can be truly invaluable, like the one that enables the bulk upload of users to the system.

Before wondering why this tool doesn’t have a specific feature, it is certainly worth browsing the extensions to see if that has been added as a user-installable option.

For those using this software to sell a specific service, it is also possible to rebrand the visuals to use specific logos, icons and colour schemes.

For those businesses that take security seriously, there is plenty to appreciate here.

What’s especially pleasing is the level of granularity that ConnectWise built into this solution, for administrators, hosts and their guests.

Roles can be created to provide just the right level of access for those using the system and be revoked when required.

Default roles of administrator and host are included by default, but new ones can be quickly defined or cloned from existing ones.

Two-factor authentication is provided control access, and all internal passwords, Windows Active Directory and LDAP logins are stored in the system for when they’re required.

LDAP can also be used to map a role based on existing user attributes (i.e. they’re an admin, so get an administrator role).

You can revoke Host Passes, even those in current use to expire, and you can even pull the authentication from live sessions and force those using them to log back in to continue if needed.

Overall, security on ConnectWise Control has been well-thought out and provide many options for tailoring access in a way that is complementary to the user's security while being relatively frictionless to use.

We have two concerns about ConnectWise Control, and one of those is some of the negative things that its previous incarnation, ScreenConnect, was used for.

As it is easy to imagine, the very simple way that a guest machine is enrolled has led to it being used by scammers wishing to take over someone’s computer and allowing them to cheat that person by accessing passwords and logins.

That’s not the fault of ConnectWise, but it has made people wary of using it, or similar tools to enable remote access.

In a business context, this isn’t a problem, and the ability to brand the solution should reduce those concerns. However, it could still be an issue for those who want to use it to provide a service to the public.

The other issue with this solution is price.

ConnectWise offers four plans; One, Standard, Premium and Access only.

The Access only option costs $30 and is tailored for those managing a very large number of systems, with potentially 5,000+ agents.

It’s worth noting that those that want Wake-on-LAN functionality will need Standard or Pro plan, and video auditing is exclusive to Pro.

For single users, there is also a free version, that limits you to a single session and just three access agents. It also lacks rebranding, remote meetings, remote printing or remote toolbox.

Despite the cost overheads, ConnectWise has a large number of satisfied customers using this highly polished tool, suggesting it is almost certainly worth what money it costs.

And, with extensions included in the mix, it is only likely to get better and offer even wider integrations.

Most customers will gravitate towards this tool because it ticks the three boxes of remote support, access and distributed meetings very effectively.

If you want a tool that will provide you with the power to manage computers remotely, then this is certainly one you should consider.