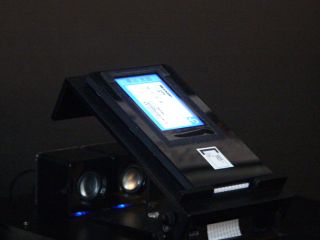 Apple's Multi-touch technology, as seen in the iPhone and iPod touch, is pretty good, but don't you think it's just a little bit, well, yesterday? If you don't already, you will when you see what Sharp has in store.

The latest prototype from Japan's display giant, on show at CEATEC this week, is a touch-sensitive screen that can recognise not just two, but up to five different simultaneous inputs.

Screen and scanner in one

The 'system LCD with embedded optical sensors' (for that is its name at present) achieves this by turning every single pixel of its 3.5-inch girth into an optical sensor. As you might guess, this means the screen can also be used as a flatbed scanner, which was demo-ed using a business card-reading application.

Aside from providing enough sensitive points to almost keep an octopus happy, the new technology has the side-effect of eliminating the need for a brightness-dimming, resolution-crushing sensor film over the glass.

In practical terms, Sharp's mapping application was a breeze to use with the usual pinching or stretching made more useful with, for example, a third tap to zoom in when fine-checking a point on the map briefly. A piano application was also fun, thanks to the ability to form proper multi-note chords.

For now, apart from virtual pianos, it's hard to see how five separate inputs could actually be used, but Sharp will surely find a way before the display is commercialised in 2008.