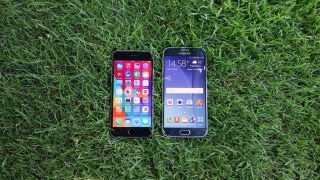 Samsung finally had something to celebrate. Its 2015 third quarter earnings report revealed that, for the first time in years, it registered a profit.

Even the lagging mobile division was given permission to take off its dunce cap, as it showed the growing semiconductor and display sides of the business that it too could make money for the Seoul electronics giant.

Its quarter of profits was a welcome silver lining in a year of layoffs and price cuts – and head scratching as it watched Apple continue its world domination. Its Cupertino rival reported record revenue and big gains in China, where the battle for smartphone market share is heating up.

But the quarterly earnings report wasn't the only silver lining on the year. Samsung showed it could go toe-to-toe with Apple in everything: in the phone, tablet, wearables and mobile payments arenas. What Apple could do, Samsung could do too – and arguably even better.

So with that in mind, is there another celebration in Samsung? Does its have the right to rip open another bag of party poppers, pour another round and keep the music pumping? Is 2015 as a whole worth remembering, especially since the Seoul firm is coming in second to Apple in balance sheet limbo?

In a word: absolutely. Some of the most impressive (and cost-effective) technology came out of Samsung this year. Apple may have had the sales, but in terms of cool, Samsung had the gear (pun intended).

Want to watch movies, play games or browse the web? The S6 does it better with its large, Super AMOLED, high-resolution screen.

Want to take high quality photos fast? The S6 has more megapixels and better focus and light control than the 6S – and its home-button shortcut gets you selfie'ing in fewer taps.

Want envy-inducing looks? The S6 is thinner than the 6S and its clean glass back gets way more "Can I see that's?" than the metal forehead and chin on the back of the iPhone.

Want even more display? Samsung's Edge phones, like the Galaxy S6 Edge, allow for a quick-look at notifications, news headlines, sports scores, even who might be calling (if the phone is face-down) without requiring users to unlock the main screen.

Yes, Apple's iPhone 6S is not without its big, innovative perk: 3D Touch. "Peeking in" to an app, email or link will undoubtedly become ubiquitous on all platforms, especially as developers make better use of it.

But consumers buy smartphones for media use, for picture taking, and for style (along with, of course, calling and texting) and Samsung's 2015 smartphones are innovators in all those categories.