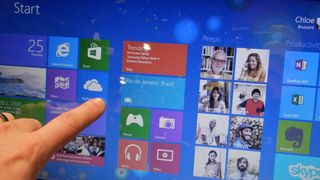 Microsoft feeling good about being Blue

Microsoft's Windows 8 is still fresh out of the gate, but talk is already heating up around Microsoft's next OS, codenamed Windows Blue.

According to anonymous sources, the software giant is taking a new direction with Blue, focusing on more frequent annual updates for a more standardized OS.

The goal is to make a new OS that will be installed by every user, and to that end the sources claim Microsoft will significantly lower its OS cost for Blue - possibly offering the upgrade for free to ensure a large user base.

That standardization will reportedly come in the form of updates to the Windows SDK, which runs across both Windows 8 and Windows Phone 8.

The SDK update will essentially force developers to create Windows apps for Blue without the ability to submit apps that only run on Windows 8.

Existing Windows 8 apps would still be supported with the change, but any new apps would need to support the latest version of Blue to get approval for the Windows store.

Sources claim that the switch to an annual OS release is part of an effort to help Windows compete with operating systems from Apple and Google, which generally update with a new version on a 12-month cycle or sooner.

Word first leaked of a Windows Blue OS in August with a rumored launch in the summer of 2013. The latest report supports those rumors, claiming a slightly, more vague mid-2013 release for the new OS.

The sources also note that Blue is only a codename for the shift to yearly updates, and that Microsoft will likely stick with Windows 8 as the official name.

The ideas of more frequent updates and a cheaper price tag would certainly be a move in the right direction for Windows.

However, the rumored Windows SDK policies sound like the convenience for users could come with heavy restrictions for Windows developers.