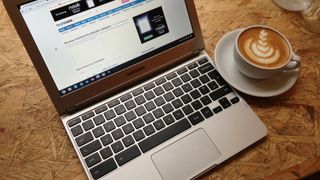 Android has a large, vibrant ecosystem of applications. From Heartstone to Plex to Twitter, Google Play is home to over 1.5 million mobile apps, according to AppBrain.

Wouldn't it be great to run all these apps on your computer, too? Now you can, thanks to Android Runtime for Chrome.

What is Android Runtime for Chrome?

Simply put, Android Runtime for Chrome (or ARC, for short) is a software package that lets users run Android apps inside their web browsers.

Google announced ARC last summer, and initially designed it with Chromebooks in mind. The idea was to bring popular Android apps to Chrome OS, which is still largely limited to running web apps. And while many popular services, like Instagram, have Android apps, not everyone offers a full-featured web-app equivalent. This fact alone made ARC a potential boon for Chromebook owners.

Then earlier this month, Google released an update to ARC, which lets users run Android apps within the Chrome browser on OS X, Linux and Windows as well.

By some measure, using ARC is a little like running a Java app in a browser in that it's a virtual environment that lets users run a certain class of apps across multiple platforms. As it turns out, Java is the programming language of choice for Android app development.

For now, ARC is still in beta, so you may encounter bugs and some apps may not work properly. While the current release is primarily for Android developers to test their apps and see how well they run, any daring soul can download ARC and try it out for themselves.

How to get Android Runtime for Chrome

All you need to run ARC on your computer is the latest version of Google Chrome. If you're using a Chromebook, Google recommends using the latest "stable channel" (non-beta) build. From there, you can get the necessary ARC Welder add-on for Chrome via Google's Chrome Web Store, and installing it takes only a couple of clicks. The download itself isn't that big, either: it's a shade under 12MB.

Once ARC Welder is finished installing, it's almost ready to run Android apps (called APKs) from your computer.

Getting the APKs is the hard part, particularly if you aren't a developer and don't have any apps of your own making to try. You can't readily download APKs from the Google Play Store directly to your PC, so you'll have to hunt down APKs using other means. APK mirror sites are one option, but that route is a risky proposition rife with potential security issues and other pitfalls.

Instead, your best bet may be to try extracting apps installed on your phone and then copying them over to your computer. Various options exist on Google Play; just do a search for "APK extractor." Many APK extractor apps are free, so you can try a few before you settle on one you like. We used the aptly named APK Extractor from Meher for our own testing and liked it.

You'll also need a way to get the APK off your phone and onto your computer, and you can do this either over a USB connection or via a cloud storage service like Dropbox.

If you're on a Mac and choose to go the USB route, you can use the free Android File Transfer app to access files stored on your device. However, depending on where your extractor app stored the APK, you may not be able to get to it this way. Instead, you may need to download a file manager app like Astro to locate the extracted APK. Once you locate the APK, you can transfer it to your computer via email or via Dropbox or other cloud storage service.

Now that you have an APK to try, launch ARC Welder from Chrome's in-browser app picker, or through the Chrome App Launcher that appears in the OS X dock, Linux dock or the Windows taskbar. The first time you open ARC Welder, it'll ask you to pick a folder for it to store files. Once you do that, you're ready to rock.

Click Add your APK and find the APK you saved to your computer. Select it, then press Open. ARC Welder will ask how you want to run the app (in portrait or landscape mode, in tablet or phone mode, etc.). Select the options you want, then click Launch App.

Current page: What is ARC anyway?

Next Page How is running apps in Chrome?
See more Software news