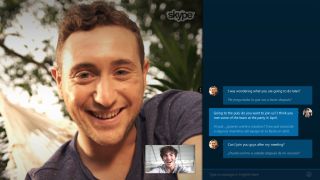 Microsoft has delivered a number of useful updates to its Skype Translator preview for Windows to make it even easier to speak to colleagues across the globe.

The update, which is available through the Windows Store, contains four changes that include text-to-speech translation, continuous recognition, automatic volume control and a mute button for translated voice, plus two additional spoken languages.

Heading up the new features is the text-to-speech translation tool that takes any instant message sent to you and relays it back in your home language, just so long as the language is supported by Skype.

The addition of automatic volume control means Skype prioritizes the translated speech over your partner's voice so that while the translation is still happening the respondent can continue to speak. There is also the chance to turn off translated speech at any time by hitting the mute option. For those that use Skype for instant messaging the continuous recognition feature translates text as it is being typed and makes global interaction much easier.

Skype Translator began its technical preview back in December and currently allows voice translation between English and Spanish, plus the newly added pair or Italian and Chinese (Mandarin), as well as instant message translation in 50 languages.

The translation service will also play an integral role in the recently unveiled Skype for Business that has replaced Microsoft Lync and provides businesses with a collaboration tool that works across all devices including even smartwatches.