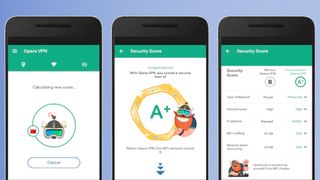 Opera has certainly been pushing forward on the free VPN front, and after bringing virtual private network functionality to its browser, and then to a standalone iOS app, it's now launched an app for Android.

Opera Free VPN is, as the name tells you, a completely free Android app that performs the usual VPN tricks such as keeping your connection secure, and circumventing geographical restrictions on certain services by allowing you to appear to be located elsewhere (it offers a choice of up to five virtual locations you can select from: the USA, Canada, Germany, Singapore and the Netherlands ).

The app contains an integrated ad tracker-blocker to prevent advertisers from tracking you online, and it offers unlimited usage in terms of data allowance, too. There's also a Wi-Fi security test tool which scans the network you're hooked up to, and if it finds any potential weaknesses it'll advise you to turn on the VPN.

Opera Free VPN is designed to be dead easy to use, with a single switch to enable the VPN, and simple menus to access functionality such as changing your device's virtual location.

The VPN service is provided by SurfEasy, an outfit that Opera acquired back in the spring of last year.

As mentioned, the Opera browser got VPN functionality baked-in earlier this year, as well as integrated ad-blocking. Opera is definitely making big efforts to position itself as a more tempting alternative to the big-name browsers which dominate the market, and these mobile apps all help push its brand recognition forward.