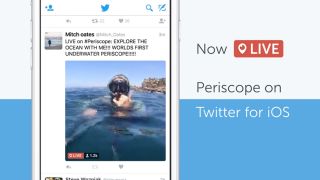 Live video streams from Twitter-owned Periscope now work inside the Twitter interface, the company has confirmed.

Essentially, it saves you a click or a tap, automatically playing the stream like any other video clip as you come across it in your timeline.

What's more, you can tap through to watch the full thing, complete with comments and hearts, without logging into your Periscope account or even having a Periscope account at all. The functionality is rolling out to the Twitter iOS app now and will come to Android and the web in the near future.

Neither Twitter nor Periscope are enjoying particularly impressive growth in terms of user numbers and engagement right now, so Twitter CEO Jack Dorsey and his team will be hoping this move makes a difference.

It certainly encourages brands and celebs to get Periscoping - they can now reach all their Twitter followers instantly rather than just those who've signed up for Periscope.