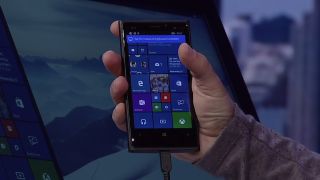 At Build 2015, Microsoft showed off a new feature for Windows 10 for phones called Continuum. Similar to how Continuum works on tablets and 2-in-1 hybrids to scale between touch and desktop experiences, Continuum for phones will turn your Windows 10 smartphone into a very personal PC.

With Continuum for Windows 10 for phones, once a user plugs in a keyboard, mouse and monitor - a KVM - apps on your phone will scale up to not only fit the larger external display, but also provide for a desktop experience.

Essentially this means that the single-pane view of Outlook Mail on Windows 10 for phone will now show up in a more productive three-pane view on an external monitor. This allows you to quickly triage your emails without having to hit frequently hit the back button to switch between your list of emails and viewing the content of a specific email.

Once the phone is plugged in, a familiar Start menu with Live Tiles will appear on the bottom left of the screen. For users on Windows 10 on the desktop, this interface brings a lot of continuity to how Windows will look on a PC and on a phone connected to an external display.

With Excel, rather than a blown-up, touch-optimized view that you would see natively on Windows Phone, once a monitor is attached, users will see a more productive view of their Excel content, similar to how Excel 2016 would look on the PC.

"Here, you'll see Excel running on the phone," said Joe Belfiore, Microsoft Corporate Vice President of the Operating Systems Group, during the demo. "But [it] looks the same as on the PC."

Given the larger display and more screen real estate of an external monitor, Excel doesn't need to show large cells that are typically displayed on the phone for a finger-friendly UI. Instead, Excel could display more cells so you can see more of your data at a quick glance without having to constantly scroll. This experience is like a desktop.

Microsoft credits its Universal apps for this desktop experience. "It's the same code," Belfiore said when talking about how PowerPoint looks the same on his display that's connected to a Windows 10 Lumia over HDMI as on the screen of a PC or Surface Pro 3.

A PC in your pocket

For enterprise road warriors, this approach is beneficial in that it could allow users to even leave behind a laptop to do quick computing work without sacrificing the user experience.

This is also useful for those who work with sensitive information. Instead of having to use a public workstation or a shared computer when traveling, business users have access to their data and content on their own device. With Windows 10 for phone, it's like having a laptop in your pocket with apps that can scale to fit larger screen sizes when attached to a monitor, TV or projector.

In developing markets where people may not have access to a traditional PC, this solution brings a PC experience in a much cheaper, portable form factor.

"Individuals can be as productive on the phone if they can't buy a full PC," Belfiore said of the experience. "With Continuum for phones, we believe any phone can be your PC."

The idea of scalable Universal apps has been done before with competing iOS and Android operating systems, but with limitations that make apps less useful at scaling on those platforms than on Windows 10 for phones.

For example, on the iPhone 6 Plus, turning the phone into landscape mode would give users access to a multi-pane view. However, Apple limits this experience to the larger iPhone 6 Plus and it isn't available to the smaller iPhone 6, meaning users must choose between portability and utility.

Additionally, connecting the iPhone 6 Plus to an external display doesn't allow apps to show more on the larger screen. Users get a mirrored version of their screen, so Excel for iOS in landscape mode on the iPhone 6 Plus looks the same as it does on the phone as on the monitor. With Windows 10 for phones, once connected to a display, Excel for Windows 10 for phones looks just like Excel 2016 for PCs and desktops, bringing additional utility to the end users.