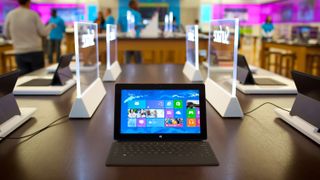 Which chip lies below the Surface Mini?

If you've been sticking your fingers in your ears and shouting 'LA LA LA' in response to the rumours that Microsoft's Surface Mini will run Windows RT: look away now.

According to "people with knowledge of the companies' plans" that spoke to Bloomberg, Microsoft's pint-sized Surface will be the first device in the family to sport a Qualcomm processor - likely a Snapdragon variant - for the first time.

If true, the move scuppers any hope of it running full-fat Windows 8.1 - and any of your favourite legacy desktop programs in the process.

On the other hand, Qualcomm's low-power Snapdragon chips, which are commonly found in high-end smartphones, would lend a RT-based Surface longer battery life compared to an Intel-based variant while allowing it to be slimmer.

If it goes ahead, the move would also place Microsoft's relationship with Nvidia on ice as far as the Surface line goes. Nvidia supplied its Tegra 3 chip for the original Surface and the Tegra 4 for the Surface 2, which both run Windows RT.

Microsoft recently sent out invites to the press for a "small gathering" on May 20, dropping a big hint that the Surface Mini will be unveiled.

Any potential release date is a little less clear: sources that recently spoke to Neowin claimed that a smaller Surface will actually launch slightly later in June.