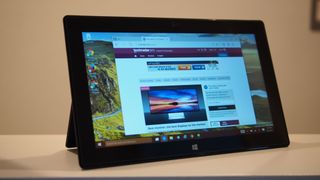 Microsoft is reversing its Do Not Track approach on the Project Spartan browser when Windows 10 arrives this summer, the company said in a statement. The Windows-maker cited compliance with the latest industry standards as a reason for the change.

Do Not Track (DNT) will no longer be enabled by default in future browser versions, including Project Spartan.

Unless users expressly enable DNT themselves, Microsoft argues that the websites they visit may not honor the DNT request. As a result, Microsoft is disabling DNT by default, and placing the burden on the consumer to enable it, citing compliance with industry standards.

"Without this change, websites that receive a DNT signal from the new browsers could argue that it doesn't reflect the users' preference, and therefore, choose not to honor it," Microsoft Chief Privacy Officer Brendon Lynch wrote in a blog post.

"As industry standards evolve, how we implement those standards evolve as well," Microsoft said in a statement. "We will no longer enable it as the default state in Windows Express Settings."

Microsoft implemented DNT two years ago in Internet Explorer 10, but now that the World Wide Web Consortium (W3C) has revised its language about tracking in the latest draft of the standard, Microsoft says it is following the wider standard.

"Key to that notion of expression is that the signal sent must reflect the user's preference, not the choice of some vendor, institution, site, or network-imposed mechanism outside the user's control; this applies equally to both the general preference and exceptions," the W3C draft reads. "The basic principle is that a tracking preference expression is only transmitted when it reflects a deliberate choice by the user. In the absence of user choice, there is no tracking preference expressed."

The disabling of DNT will apply either when a user sets up a new PC, or when they upgrade from a previous version of Windows or Internet Explorer.

Even though DNT will not be enabled by default on Microsoft browser products, Microsoft says it will provide users with instructions on how to enable the feature if they choose.

It's unclear if these instructions will appear when a user first runs Windows, or initially launches Project Spartan or Internet Explorer. Without these instructions at the first launch of the browser, users may not be aware of their Do Not Track status, and this could leave them vulnerable as they browse.

"Put simply, we are updating our approach to DNT to eliminate any misunderstanding about whether our chosen implementation will comply with the W3C standard," Lynch argued.