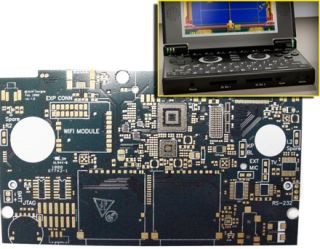 There have been times when we have seriously thought that the open-source does-it-all gaming handheld 'Project Pandora' would never see a full commercial release.

Yet it seems that – almost against all odds ('given the current climate' etc. etc.) – that the Pandora handheld is not vapourware after all.

Open-source gaming fans will certainly be glad to hear that project lead Michael Weston and his team have uploaded the first pictures of a manufacturing test unit of the Pandora handheld built using mass production parts.

The reason for gamers' excitement about Pandora is down to the fact that it is powered by a beefy ARM Cortex-A8 CPU and a PowerVR SGX programmable GPU – which means it should really be the fastest and most powerful handheld gaming console in the known universe!

Team member Craig Rothwell notes on the GP32X forums that this is the first Pandora production unit. Which means, we hope, that we should finally be getting one in for review in the very near future.