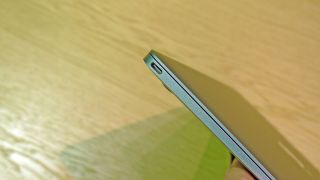 The familiar USB port is changing – it looks different, it's faster and higher power than ever, and it can do a lot more than just connect USB devices. Switching to the new reversible, either-way-up USB type-C connector is just one of the changes in USB 3.1.

That's one reason Apple chose the port for its new MacBook, with its appearance being a first for the laptop world, replacing the Thunderbolt and MagSafe connectors. The advantages that will have every peripheral and device maker supporting the new connection are enough to give up the magnetic convenience of Apple's own power connector. And compared to Thunderbolt, it's smaller, it's not Apple-specific and it's easier to use.

"You don't have to worry about the orientation of the plug or the different ends of the cable; whichever way you plug it in, it will work and you don't have to worry about whether it's an A or B type cable," Jeff Ravencraft of the USB Implementers Forum told us. The connector is also smaller. "If you want to use a monitor as the dock for all your peripherals, type A USB connectors are too big, and type B was designed for phones and it doesn't work as well for other devices." It's also fast, and smart.

Thunderbolt came out of an Intel project called Light Peak. Originally it used Kevlar-coated fibre optic cable (with an extra copper cable for power), the familiar USB port and the same protocol as USB but it could deliver speeds from 10Gbps up to 100Gbps over cables up to 10 metres long – and the cables would have been cheaper to make than HDMI cables.

But PC makers weren't keen on the cost of the Light Peak port, which had a small laser inside, and when Apple adopted the technology for Thunderbolt it switched back to copper – and a proprietary connection for delivering power, data and video signals with (initially) 20Gbps bandwidth, which meant pricey cables, and pricey controllers.

Intel was ready to licence the port to them but PC makers didn't pick up Thunderbolt, which meant the dozens of drives, docks and video capture devices launched in 2012 never turned into hundreds or thousands of products to match USB (and if you wanted a Thunderbolt display, the only real choice was Apple).

USB 3.0 didn't quite match Thunderbolt on speed but with the much bigger PC market to sell to, USB 3.0 peripherals became common. You can drive displays as well, if they have a DisplayLink chip. At CES 2015 we saw two 4K displays connected to the same PC over a 10Gbps USB 3.0 connection.

USB 3.1 with the type-C connector will initially be 10Gbps. But "this will scale beyond 20Gbps data rates," Ravencraft told us, "this connector will support that." The big advantage is not just the speed, but what you can connect over the new USB.

It lets you connect many more kinds of devices, and it supports two-way connections (using the USB Dual Role specification), so you can have devices that can be a USB host, a peripheral – or both at the same time.

That will make plugging peripherals into phones and tablets a lot easier; your phone will know when to act like an external hard drive when you plug it into a notebook, and when to let you browse the external hard drive you've plugged into your phone. In fact you will be able to use your phone to play video that's stored on your PC – and even send that to another screen over Wi-Fi, using another USB feature called "media-agnostic" USB.

Media-agnostic USB is a way of having a USB connection without a USB cable, so the next USB connector after USB type-C might look like Ethernet or be wireless – or have multiple pins like the MHL (Mobile High-definition Link) to HDMI cable that can drive a 6K resolution display from your phone.

"It will allow wireless devices and docking stations to communicate over USB without a physical connection," Ravencraft explained. "You can have a device out on the cloud communicating over Wi-Fi or WiGig, but it looks like it's right here, connected by a USB cable."

You could have a remote access USB connection to peripherals, or an encrypted connection to remote storage that looks like a USB drive to your PC. Media-agnostic USB works with USB 3.1 and USB 2.0 ports, and over WiGig, Wi-Fi and WiMedia UWB connections – and maybe others in the future. "It could run over Zigbee, or you could do USB over fibre," Ravencraft suggested.

Next Page Power to the ports
See more Peripherals news