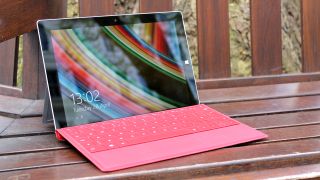 Microsoft's own Surface is helping to show the way

Apple's iPad may have been on the slide for a couple of years now, but it's not all doom and gloom in the tablet world – and in fact things are looking quite rosy for Windows devices.

This is according to the latest 'Tablet Operating System Forecast' report from Strategy Analytics, which shows that for the first nine months of this year, Windows tablets are up 58% on 2014, with total shipments for 2015 predicted to hit 22 million.

That will give Microsoft a 10% share of the tablet market, compared to 22% for Apple (remember the days when Cupertino owned practically the entire market?) and 68% for Android.

Projections for 2019 show an even healthier picture, with sales of Microsoft-powered slates predicted to hit 49 million units, more than double this year's tally.

Strategy Analytics reckons that four years down the line, Microsoft will have an 18% share of the tablet market, with Google on 59%, and Apple staying steady on 23%. So evidently the iPad Pro isn't seen as turning Cupertino's fortunes around longer-term, at least not according to this analysis (despite the fact that Strategy Analytics does state that Apple will strengthen its position in the enterprise and prosumer arenas with its new slate).

It's certainly Tim Cook's hope that the giant iPad will help to stop the sales rot which has set in quarter after quarter since the beginning of 2014.

What will help drive the success of Windows tablets? Despite having a more balanced approach in terms of pricing compared to Android, Windows budget offerings will still be plentiful, and these cheap and cheerful slates will help to push Microsoft's OS onwards and upwards.

Eric Smith, Senior Analyst, Tablet & Touchscreen Strategies Service at Strategy Analytics, commented: "Windows Tablet market share has dwindled in the mid-single digit range for the last few years but Windows devices now run the gamut from 2-in-1 Tablets by E-Fun in the US starting at $139 [around £90, or AU$190] retail, to Microsoft's Surface Book starting at $1499 [around £990, or AU$2080] retail.

"Power, graphics, and functionality aside, Windows 10 provides a stable base from which the ecosystem can grow and we are entering a world where Windows Tablets take significant market share from Android Tablets on the low end and compete head-to-head with iPad in the high and premium segments."