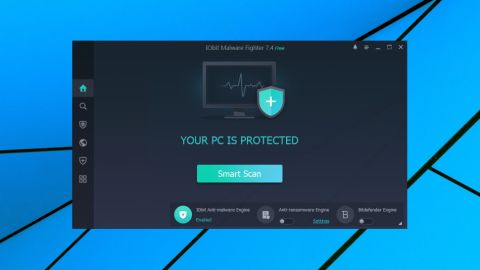 IObit Malware Fighter is free and simple to use, but it doesn't have the accuracy, or the features, or any compelling reason that might justify installing it.

The package is designed to run alongside an existing antivirus, rather than replace it, and so the feature list is, well, short. There's on-demand scanning and limited real-time protection via IObit's own engine, and bonus tools protect your browser home page and DNS from hijacking, but that's it.

IObit has saved all the good stuff for its commercial Malware Fighter Pro edition. Bitdefender engine; full real-time protection; specialist anti-ransomware layer; behavior monitoring; detection of malware running in RAM; blocking unauthorized access to your webcam; they're all available, if you're willing to pay the price ($20 to cover one device for one year, $40 on renewal.)

If that sounds interesting, check out our IObit Malware Fighter Pro review to find out more. But here, we're going to explore the free edition to get a feel for what it can do.

IObit Malware Fighter Free was easy to download and install, and, unusually, the company didn't ask us to hand over our email or any other personal details along the way.

On first launch the program suggested we run a Smart Scan. This looks like IObit's equivalent of the Quick Scan in other products, where it checks running processes, the Registry, and key system areas only.

The whole process took around 7 minutes. That's similar to many other packages, but it only detected the most serious of threats, the kind of malware you would expect your regular antivirus to catch, anyway.

The Malware Fighter interface has plenty of panels and screens, but most do little more than turn features on or off, and can probably be left at their default settings. All you really need to do is tap the Scan button on the sidebar and choose from the three scan types: Smart, Full and Custom.

Overall, though, it's not difficult to see how the package works. Apart from all the marketing (messages asking you to upgrade to the commercial edition are everywhere), it's much the same as any other antivirus package.

You're also able to launch scans by selecting files, folders or drives in Explorer, right-clicking and selecting Scan With IObit Malware Fighter. This isn't very well implemented, though, and doesn't support running scans in parallel.

If your antivirus is busy running a full system scan, for instance, a good package will still allow you to scan a suspect file from Explorer and see the results separately. Trying this in Malware Fighter Free just displays the already active scan window.

There's no behavioral analysis to monitor processes and block anything that looks dangerous, no 'scan when idle' option, no scheduled scanning. (These are only available in the commercial Malware Fighter Pro.)

There's no significant configurability. You can't create multiple custom scan types, for instance, and then tweak exactly how each of them behaves. The best Malware Fighter can offer is a Scan Options pane in its Settings dialog with a few useful customisations: you can choose whether to scan archives, to skip large files, to alert you to 'potentially unwanted programs', and to scan by low, normal or high priority (higher priorities improve scanning speeds but have more of an impact on system performance.)

Scan times are relatively slow, at least at normal priority. All scans (even just a single file) begin with an 'initializing database' step, which we found could take up to a minute. Custom scans took an average 5-7 minutes on our test PC, but a full system scan required 150 minutes, more than twice as long as most competitors. We didn't notice any significant optimization, either-- our second and third scans took broadly as long as our first.

How much performance matters here is open to question. Speedy scanning is welcome, but in the case of a second opinion tool, like Malware Fighter, it's probably more important that it checks every single file, rather than misses something because you're so focused on performance.

While Malware Fighter is distinctly short on core antivirus features, it does have a number of related extras, mostly in its Browser Protect page.

Download Protection should see your downloads and email attachments automatically scanned for threats. That's the idea, at least. The reality is a little different, as we found we could download some files without Malware Fighter raising any alert, even though it would tell us they were a threat if we scanned them afterwards.

The Homepage Advisor monitors you of changes to your homepage and search engine in any local browsers (Chrome, Edge, Internet Explorer and Firefox were supported on our test system.)

A DNS Protect system claims to prevent changes to your DNS settings, and can either preserve your current system settings or enforce use of common DNS providers (Google, Verizon, OpenDNS, Comodo, DNS Advantage.)

DNS protection is useful, in theory, but difficult to manage and assess. You may have multiple network connections with different DNS settings, for instance, and entirely legitimate software which will regularly change these (a VPN client, say). We're glad to see Malware Fighter try to do this, but we've not tested the feature in enough depth to give a verdict.

Malware Fighter also lists a Surfing Protection & Ads Removal feature, but this requires browser extensions. The package installed a Firefox extension on our test system, but ignored Chrome, leaving us to set it up manually. But we weren't impressed, and you'll get better results from a big-name free blocker such as uBlock Origin.

We noticed one remaining option which looked promising, but turned out to be a disappointment.

Right-clicking a file in Explorer, we noticed an option to 'Force Delete with IObit Malware Fighter' -- delete a file even if it's in use by some other application. That's useful, and not just if you're trying to clean up malware, as legitimate programs can sometimes leave unwanted files around.

Unfortunately, it doesn't always work. When we tried this, IObit Malware Fighter first warned that the file couldn't be restored from the Recycle Bin - what? that's not what we wanted to do - and then, once we agreed it wasn't an issue, told us it couldn't delete the file, anyway.

IObit Malware Fighter had average detection results in our tests, but as they are too small-scale to give a definitive picture of antivirus accuracy, we normally check how a product is reviewed by the major testing labs. Unfortunately, that's not possible here as IObit isn't covered by any of them.

With no information available from other sources, we decided to try an additional test of our own. We've developed a custom ransomware simulator which spiders through a specific folder tree on our test system, finding and encrypting potentially thousands of media and document files. Would Malware Fighter be able to protect against a threat it had never seen before?

Well, no. The antivirus engine didn't detect or block the threat, and just ran quietly in the background as all our test documents were lost.

That's no great surprise as Malware Fighter doesn't include behavior monitoring, and as you're intended to be running the program alongside another antivirus, hopefully our threat would be caught separately. But it's a reminder that Malware Fighter doesn't do very much, and it looks like there's much better protection to be found elsewhere.

IObit Malware Fighter isn't a terrible package - it's free, doesn't require registration and really will detect some malware - but it's also slow, short on features and with a distinctly average engine, and we see no compelling reason to install this package ahead of anything else.