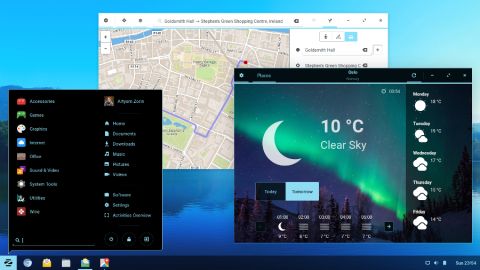 We were sceptical at first, but this distro is a treat for the eyes and an absolute pleasure to use.

This article was provided to TechRadar by Linux Format, the number one magazine to boost your knowledge on Linux, open source developments, distro releases and much more. It appeared in issue 219, published January 2017. Subscribe to the print or digital version of Linux Format here.

Roger Moore’s final outing as James Bond (‘A View to a Kill’) saw him defeat the evil blonde supervillain Zorin with all the characteristic eyebrow-raising, bad punnage and borderline sexism that ‘80s audiences so loved. This is entirely irrelevant to Zorin OS, under consideration today, but those who don’t remember history are doomed to repeat it, and we’ve all seen enough of Roger’s eyebrows.

Unlike 007, Zorin OS’s illustrious history only extends back to 2009, but apparently that’s enough time to build a loyal fanbase (it’s No.8 on DistroWatch) and hone an impressively slick desktop environment. The default look is similar to Windows 10, but maybe even a little more stylish. Flat, clean and minimal, with some shortcuts next to the menu.

Those wanting a different look have two alternatives: a more standard Gnome 3 look (top bar only with everything else accessible from the Activities Overview) and a more classic Windows look with window titles in the taskbar. Its appearance can be further customised (aberrant individuals can even move window buttons to the left) and a pervasive colour scheme can be set. Those who are willing to shell out €19 (around £16, $20) for the premium edition can also opt for Ubuntu, Gnome 2 or Mac stylings.

Installation via the skinned Ubiquity installer was a breeze, as we’d expect, and the standard installation occupied just under 5.5GB. Being based on Ubuntu 16.04, the underlying desktop is based on Gnome 3.18 and includes a good selection of the core Gnome applications.

Of particular note are the inclusions of Déjà Dup for backups and Seahorse for managing keys and passwords. Zorin also showcases modern communication tools, such as the Geary email client (also featured in elementary OS) and the Empathy instant messenger. Also included is the Activity Journal application, which can connect to Google, Microsoft or ownCloud calendars.

Zorin used to feature a lot of Compiz effects, namely wobbly windows and the desktop cube. Fortunately, tastes have moved on and those fripperies are gone. It turns out we don’t need windows to disappear in a puff of driver-crashing smoke to have a lovely desktop. There are some subtle drop shadow effects and transparency on the taskbar, both of which enhance usability besides looking pretty.

A clean boot on our modest review machine (a second-generation Intel Core i5 with 4GB of RAM) took about 20 seconds and saw Zorin occupying less than 600MB of RAM. So the desktop stylings don’t appear to hurt system resources, or at least no more than vanilla Gnome 3 does. This definitely isn’t for older hardware though, Chromium and LibreOffice here are as resource hungry as they are anywhere else.

According to its blog, this is Zorin’s ‘biggest release ever’, and it certainly is impressive. Unlike previous editions, Zorin will now feature regular point updates, presumably keeping cadence with Ubuntu’s hardware and security updates.

We don’t really think a distro should try to be Windows-alike or Mac-alike, since that risks aping the flaws in those systems. But anything that eases the transition to desktop Linux is alright by us. If, like Zorin OS, it can do that while looking awesome, and without hiding key config tools and the Terminal, then so much the better.