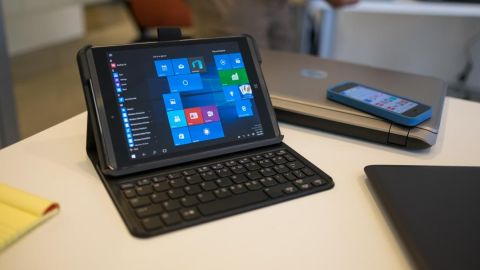 With a high-res screen and security features, this 8-inch Windows tablet could please both everyday users and small businesses.

Updated: We've updated our impressions of the HP Pro Tablet 608 after using Windows 10 on the device.

As we march on closer to the Windows 10 launch this July 29, more devices are popping up left and right. One of the latest is the HP Pro Tablet 608, and what a tablet it is. HP's pro slate comes outfitted with quite a bit of kit, including a 2,048 x 1,536 display (which technically measures 7.9-inches) and quad-core Intel Core Atom processor.

This is by far the highest-resolution 8-inch Windows tablet to come out yet, putting it on an equal playing field with slates like the iPad Mini 3 and Nexus 9. With the full functionality of Windows 10 under its belt, the HP Pro Tablet 608 should give the leading mobile devices a run for their money.

Externally, the HP Pro Tablet 608 actually has a lot in common with the Nvidia Shield Tablet, as far as looks go. The two share a similar trait of having forward-facing stereo speakers at the top and bottom of the screen. Likewise, the two slates share chamfered edges that run around the top edge of the machine.

Of course, there are plenty of outward differences too. While the back and sides of the Shield Tablet is coated with a soft touch material, the 608's body is made primarily of bare plastic. The HP pro slate is also a bit wider, thanks to its 4:3 aspect ratio.

Typically going with a squarer screen creates some unsightly black bars while watching media, but the 608 was designed to be more of a productivity device. With this in mind, the wider screen makes it easier to read full page documents at a glance while offering more horizontal space to scroll through webpages.

Lighter and tougher than ever

Don't think the light weight means this tablet is chintzy, though. It comes with a metal reinforced chassis along with. The screen is also covered with a scratch resistant sheet of Corning Gorilla Glass 4, which a HP representative was happy to rap her knuckles against.

What's even more impressive is the screen that's behind this protective sheet of glass. With a resolution of 2,048 x 1,536, the 608's panel looks unbelievably sharp whether you're looking at images or text. While Windows 10 looks a bit tiny, users will be able to tweak their scaling options.

For the most part you shouldn't have problems tapping on application tiles while this device is in tablet mode. Still, nothing in Windows 10 looks painfully tiny, but you'll have to carefully tap and peck at the screen, especially while typing with the virtual keyboard.

While touchscreen controls were a main focus of Windows 8 and 8.1, they finally feel fully perfected on Windows 10. Slipping the action center into view feels fluid and offers many more controls including a new battery saver mode that's essential to mobile device. Additionally, having Cortana finally puts Windows 10 tablets on par with iPads backed up by Siri and Android tablets you can command with "OK Google."

Unfortunately, I wasn't able to test the tablet's speakers, as the unit didn't have any audio or video media on it nor was connected to the Internet at the time. However, front facing speakers usually help to make a device sound better, as seen with the Nexus 9.

While this tablet might seem tantalizing for just media consumption and regular usage, the 608 also has a ton of features aimed at business and enterprise applications.

The Pro Tablet, for example, is equipped with dual microphones to better record your voice for video-conferencing as well as Cortana – Microsoft's voice-operated personal assistant. On the security front, the 8-inch slate comes loaded with a HP Client Security and Touchpoint Manager to provide advanced security features built on top of the OS.

The Pro Tablet 608 can even be easily converted for retail use. HP offers a Pro Tablet Mobile Retail Solution, which serves as both a durable case for the 8-inch diagonal tablet with a credit card reader on the back that doubles as a handle of sorts. The Pro Tablet also supports a wide range of third-party mobile payment methods, including EMV, NFC, MSR, and most digital wallets.

As for the other accessories, users can also opt for a keyboard case or digital pen. There's also a portable dock that you can actually fold up and put in your pocket. The only problem with the dock is that, while it has HDMI, the HP product manager behind the device informed me that the device needs to be paired with a display wirelessly using Miracast.

From my early impressions with the device, the HP Pro Tablet 608 feels and looks like an amazing piece of kit for the price. Compared to the Nexus 9 or iPad Mini 3, this tablet offers the same screen resolution, but with more storage and the full software functionality of Windows 10.

At the same time, this device marks a big step up for Windows-based slates with plenty of business-oriented features that stores and small companies will appreciate.

The HP Pro Tablet 608 will be out by July (with Windows 10 in August), and you can be sure TechRadar will get its hands on this device for a full review. Until then stay tuned to this space.