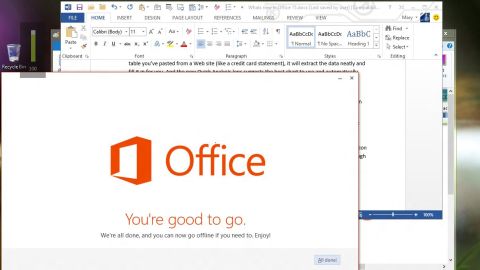 With a new version of Office, the first question that always springs to mind is whether there is anything new that Microsoft can add to a mature and powerful productivity package.

Word is a product with 20 years of features and being able to insert videos and online images is more a matter of catching up with the times than a major new feature. But PDF Flow and the massive improvements in tracking changes and comments in documents are hugely useful and if you have a touchscreen PC, this is by far the best version of Office to use on it.

All of the key Office applications get new features that are well implemented and equally well worth having.

Also, with the switch to subscription pricing, the days of asking 'is it worth upgrading for this feature, no matter how useful?' are over. When new features come along, you'll just get them for the same price. But you won't be able to skip a year if you're happy with what you have, so do the sums on what Office costs you long term.

Office 2013 is about more than a new interface. From little touches such as animating calculations as they change to new tools that help you get the Excel chart that shows what's important in your data, from in-place replies in Outlook to change tracking and commenting in Word that doesn't make your document look like a battlefield, the desktop apps get worthy new features.

If you switch PCs often, you'll love the fast streaming install and seeing your recent documents on every PC. And we're looking forward to getting more new features through Office 365 instead of waiting three years for neat new features that you might want without paying for an upgrade (or spend the time updating every PC in the office).

Sometimes cleaning up for the Windows 8 look means dumbing down. Advanced features such as Split View and Autocorrect are now harder to use, which is a step backwards not forwards, and strangely at odds with the clear and simple way other powerful features such as Pivot Charts are exposed.

The newer your PC and the higher your screen resolution the more you will like the new interface. If you have an older PC with a low resolution screen, you'll have to minimise more of the interface to see the same amount of your document.

If you look at a list of the new features in Office 2013, you might not see any one feature you can't live without, but after even a few days of using the new applications there are plenty that you'll miss. This is another big advance in usability, combined with some extremely clever new tools.

Performance is excellent and the Office 2013 programs are slick and smooth in use.

There are features for power users, especially in Excel and PowerPoint, and there are others that either make it easier to use the power of existing tools or give you whole new ways to complete tasks without being an expert.

While this isn't a perfect touch version of Office, the improved Touch Mode is extremely usable on any decent touchscreen PC. What's missing is a version of Outlook for Windows RT users (and there's nothing for iPad users).

Mostly Office 2013 gets the right balance between streamlining and oversimplifying; there are some places where we miss specific power user options, but the sheer usability and ease of use will give the vast majority of uses a much better experience.

The great thing about a subscription service is that you won't have to wait as long to get updates and improvements; they won't change the fundamentals but you will keep getting more options the longer you pay for Office 2013.