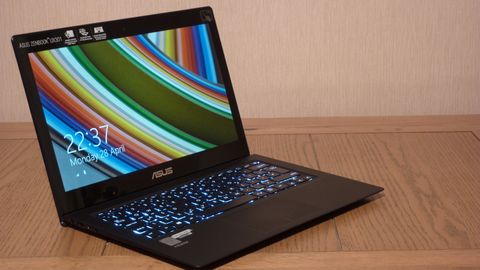 The Zenbook UX301LA performs well, with good sound quality and a very reasonable battery life. However, it's quite underwhelming overall, with a high price and a fairly bland design.

The Asus Zenbook UX301LA is an Ultrabook with a 13.3-inch IPS screen that retains the 13-inch MacBook Air-like wedge shape of its original 2011 incarnation. It has been given a fresh look with new materials replacing that version's aluminium lid and chassis, a style that has become all too predictable from laptop designers.

The 2011 version was of the first laptops to adhere to Intel's Ultrabook specification, which places strict design guidelines on manufacturers. To earn that label, laptops must meet certain requirements regarding its dimensions, battery life, and so on.

Fast forward to now, and Intel's modern Haswell mobile platform, called Shark Bay, requires Ultrabooks to be no more than 20mm thick, with a battery that can cope with 6 hours of HD video playback. A touch-sensitive screen is now mandatory, along with support for features such as Intel's WiDi wireless display.

The Asus Zenbook UX301LA is now dark blue, which appears almost black under dim lighting conditions. The lid is covered in a layer of scratch-resistant Corning Gorilla Glass, and the area around the chassis is made from ceramic, for a smooth but solid feel. As with the majority of modern computers, the backlit keyboard uses the familiar isolated or chiclet style, which is great for typing on, but might not appeal to gamers wanting big and chunky WASD keys.

Asus has gone beyond the basic Ultrabook specification. The Asus Zenbook UX301LA comes with 802.11ac wireless networking, a choice of high-PPI touch-sensitive screen resolutions of either 1920 x 1080 or 2560 x 1400, 8GB of memory, a dual-core Core i5 or Core i7 Haswell processor, which naturally comes with Intel's Iris integrated graphics, and dual 128 GB Sandisk SSDs in RAID 0. The 802.11ac wireless card is a two-stream Intel 7260 adapter.

Typical of Ultrabooks, there's only a small handful of ports. Mini DisplayPort, micro HDMI, Two USB 3.0, an SD card reader and an audio jack occupy the sides, along with the power connector.

When held, the Asus Zenbook UX301LA is bulkier than you might expect. The glass surface on the lid feels pleasant but shows up fingerprints wherever it's touched. For this reason, a micro-fibre cleaning cloth and non-alcoholic fluid would definitely make a great companion purchase and it seems Asus may have missed a trick by not including something similar in the stylish packaging that accompanies the Zenbook UX301LA.

The main section of the laptop feels strong – I pushed it quite hard and didn't notice even the tiniest amount of flexing, but the screen easily bends under comparatively little pressure.

The trackpad has a generous amount of space, but no physical buttons. Instead, left and right clicking can be done by pressing at the bottom, and there's custom software to allow for gestures, such as swiping to go back in a web page, and scrolling up and down with two fingers. These work excellently, and can all be customised in the software. However, one shortcut becomes highly irritating: swiping at the side of the trackpad to switch between desktop and Windows 8 Modern UI application. It's very easy to do this accidentally, and is best disabled.

Compounding the issue with fingerprints on the lid is the glossy display. Touch-sensitive laptops have a substrate layer that requires them to have a glossy screen, but it's seems especially noticeable in the Asus Zenbook UX301LA, perhaps because the dark casing highlights the reflections more than a lightly-coloured chassis might.

A critical issue currently facing PC laptop designers is the use of high-resolution screens in small displays, when text in Windows and third-party applications appears too small to see. With the Windows desktop DPI set to default, a full HD resolution on a 13.3in screen is really pushing the boundary of usability, so I'd really hate to see what the 2560 x 1440 variant looked like.

Windows 8.1 automatically adjusts the desktop DPI, which makes text legible and improves usability a lot. It has to be done manually with vanilla Windows 8 or Windows 7 though, so raising the DPI setting is the very first thing I'd do on any laptop with a high resolution screen, which includes the Asus Zenbook UX301LA, which arrived with Windows 8.

But as with other laptops I've tested, not all third-party applications adhere to the DPI settings, and remain at their standard size with tiny text, an issue for which there is no current solution.

Since there's no PC version of Apple's proprietary PCI-Express storage connector it now uses in its computers, designers have to be creative to boost SSD performance beyond the limits of the SATA interface. But using two SSDs in Raid 0 can offer mixed performance, especially since Sandisk SSDs, as found in the Asus Zenbook UX301LA, aren't the fastest around.

Having two of them provides some hefty burst transfer speeds: 981 MB/s when reading data and 586 MB/s writing. But overall SSD performance is affected by more than just burst data transfer. Other results, such as a random 4K write result of 233.7 MB/s are indicative of worse overall IOPS performance than some high-end single SSD.

CPU performance was as expected from a low-voltage processor. I measured 240cb in Cinebench 15, which is significantly less than you'll get from a high-end laptop, but more than enough for such tasks as document editing, media playback and web browsing.

That said, the Asus Zenbook UX301LA didn't feel particularly quick. Although boot times were fast, switching between Modern UI and the Windows desktop wasn't quite as instantaneous as I'm used to. A few times, resuming from sleep took longer than I'd like as well. I loaded up an 1080p encoded rip of Avatar, and had absolutely no problems with playback.

I tested the battery life by playing this file looped in Windows Media Player, with the screen brightness set to 120 cd/m2. On a full charge, it lasted well into the third play of the film, conking out after six hours 45 minutes, enough time to be really tortured by Avatar's dreadful script and plot. The PCMark 08 battery life test wasn't as good though, lasting five hours 32 minutes.

The Cinebench 15 OpenGL result of 22.6 points to limited gaming performance. I ran 3DMark and saw some slightly better results, but for high performance in modern demanding 3D titles such as Battlefield 4, it's clear that a more powerful discrete graphics card is needed.

Although light gaming and older software will work fine, if you want a gaming laptop, or a system for demanding tasks such as video encoding, Ultrabooks are not the best choice. On the plus side, Asus has ensured the fans are fairly inaudible when they inevitably speed up once the Zenbook UX301LA is under load. This is refreshing, given the number of portable systems that sound like the launch of Apollo 11 whenever they see the slightest hint of a CPU-intensive application.