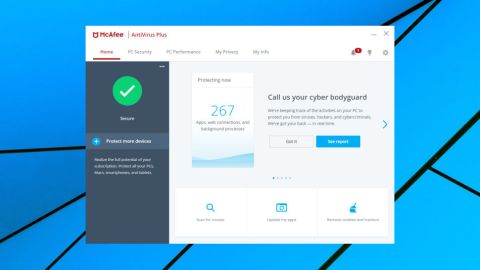 McAfee does a decent job of keeping you safe, but it's just not quite as fast, powerful, accurate or easy to use as the best of the competition.

Founded more than 30 years ago, McAfee has grown into one of the largest cybersecurity companies around, with an expanding enterprise business, and a full range of consumer antivirus tools for all the major platforms.

McAfee AntiVirus Plus has a long list of features, including antivirus, malicious URL blocking, file shredding, PC speedup tools, anti-theft for mobile devices, and more. The package is available for PC, Mac, Android and iOS.

New features in this release start with a machine learning-based mobile antivirus engine, which should allow for faster detection of mobile threats.

McAfee has enhanced its iOS app by porting a couple of previously Android-only features (network threat detection and blocking of malicious URLs), while the Android build gets the ability to monitor app data usage, and set limits.

There's an unusual plus in McAfee's 'virus protection pledge'. If your computer gets a virus, a McAfee expert will remotely access your machine to remove it. If they can't, you'll get a full refund. We would rather our antivirus didn't allow us to get infected in the first place, but it's good to know that help will be there if you need it.

The price initially seems expensive at $65 a year. The reason is that this subscription covers you installing the software "for personal use on all supported devices you own for the duration of your subscription." There's no need to count devices in case you run over some arbitrary limit – one payment covers everything.

There's no doubt this pricing scheme wins out for simplicity, but unless you have a lot of devices, it may still not be that great a deal. Kaspersky's high-end Total Security suite costs $46.80 to cover five devices for one year, or just $85.80 for a five device, two-year license.

There's no trial available for McAfee AntiVirus Plus, but the company does provide a 30-day build of its capable security suite, McAfee Total Protection. That's not ideal, but the core interface and technology is the same, and you can check out Total Protection's extra features as well: these include a firewall, spam filter, password manager, parental controls, online storage, and more.

The trial is easy to find and set up. The installer downloads and installs its files without complaining about 'incompatible' software or hassling about options or settings. The setup program even minimizes itself to stay out of your way, and you can carry on with something else while it works.

When the interface finally appears, a series of popups highlight key areas of the UI and briefly explains what they do. It's a useful guide which gets you up and running right away, but again you can dismiss it in a click if you know the program already.

A quick check with Task Manager revealed a surprising number of new McAfee-related background processes, as many as 19 in some situations. That makes for higher than usual RAM use at around 200MB, but there was no significant CPU or disk usage when running in the background, and overall the package had no significant impact on our performance.

McAfee AntiVirus Plus has a bulky interface which somehow seems carefully designed to use as much screen space as possible. Its window is large and there are five tabs, each crammed with large buttons, unnecessary text and a surplus of white space, yet it still looks mostly empty.

What's more, the one button you might expect to get with an antivirus – something to launch a scan with a single click – isn't there. Instead you must click 'Scan for viruses', then choose your scan type: Quick or Full. (There are no other built-in scan types, and no Avast or Avira-like option to create and save a custom scan type of your own).

Scanning is initially slow – the first 'quick' scan that we ran took around 25 minutes – but subsequent checks were faster. Overall, McAfee had average scan speeds, although we've no issues with its effectiveness. The program detected all our test threats and didn't raise a single false alarm.

Web protection is handled mostly by McAfee Web Advisor, a browser extension which detects and blocks access to malware, malicious and phishing sites, and more. It's not bad (and we're happy to see it now supports Edge, as well as Chrome, Firefox and Internet Explorer), but it's already available for free to anyone, no subscription required.

The new Performance section includes App Boost, which intelligently optimizes CPU and I/O priorities to boost system performance. McAfee says you could see an 11-14% increase in speed, although we suspect that's not going to happen in most cases.

A Web Boost feature is a Chrome extension which automatically stops videos auto-playing on many popular websites (YouTube, Netflix, Twitch.tv, Skype.com, ClickMeeting.com and others). This works, but it may not make much difference to your web performance, and it doesn't add a lot of value to an antivirus package.

An Update My Apps button looks more useful, detecting and offering to install missing updates for key applications. This warned us that our Flash setup needed a patch, which was correct. But it gave us the wrong version number, was unable to install the update itself, and continued to tell us we were missing a patch, even when we installed the very latest version manually.

Elsewhere, there are simple tools to clean up cookies and temporary internet files, and securely wipe confidential files so they can't be undeleted. They're effective enough, but you can get free tools which do more.

A more useful networking module displays a map of connected computers and devices. You can get download links for the software to protect PCs, Macs, iOS or Android devices, and view and manage the devices when they're installed.

If anything goes wrong, there's 24/7 live chat support from expert technicians who can remotely access your computer to deal with the most complicated of problems (helping to remove malware, for instance). We didn't give them anything to do this time, but previous reviews have shown us McAfee delivers a top-quality, professional service.

McAfee has both iOS and Android mobile apps, but they provide very different feature sets.

McAfee Mobile Security for iOS includes a standard set of anti-theft tools (locate your device, take a picture of the thief, remotely wipe data or activate an alarm) and a basic backup option. Nothing special there, but the two new additions make a real difference: Safe Web prevents you accessing malicious websites, while Wi-Fi Threat Scan detects and alerts you to common network attacks (Man In The Middle, SSL decryption/stripping).

McAfee Mobile Security for Android has everything in the iOS build, and adds much, much more: antivirus, ransomware removal, app privacy inspection (check permissions and remove anything which goes too far), call and SMS blocking, power management and more. New this time is a Data Usage Tracker which monitors how much data is transferred by an app, and allows you to set data limits by day or month.

It's a powerful and popular app, as you can tell from its Google Play rating of 4.4 from almost 600,000 users. If there's an issue it's that you can download and use the iOS and Android apps for free anyway – the only differences in the paid version are phone support, media upload support and no ads.

AV-Comparatives' Real-World Protection Test measures the performance of 18 top antivirus engines against the very latest malware. The company runs 10 tests every year, making it a great way to monitor vendors over time.

McAfee's test performance has been inconsistent recently, with for example the company managing an excellent 5th place with a 100% protection rate in August 2018, but falling to a lowly 14th in the September 2018 test.

AV-Comparatives also produces summary reports which combine the results of five tests, often giving a clearer view. The February - June 2018 report placed McAfee in a creditable 6th spot with a 99.6% protection rate. That's similar to many other top-quality competitors – Kaspersky and Avira were 4th and 5th with a 99.7% protection rate, Symantec 7th with 99.5% – and suggests there's no significant protection issue here.

The big testing labs deliver an excellent overview of an antivirus engines' reliability, but their reports won't always tell you everything you need to know about a package. To try to find out more, we carried out a small additional test of our own.

We created a simple ransomware simulator which spiders through a folder tree, reading and encrypting documents, images, MP3s and more. By running this on our test system, we were hoping to see whether McAfee AntiVirus Plus could detect ransomware by behavior alone, and find out how many files might be lost before the attack could be stopped.

The answer was disappointing, as the program totally ignored our simulator and allowed it to encrypt thousands of files. Other antivirus engines have performed very differently, so for example Kaspersky Antivirus 2019 not only spotted and killed the threat, but also restored the small number of files it had managed to encrypt.

Although we prefer an antivirus to block our simulator, we can't be sure why McAfee AntiVirus Plus missed the threat, or what that tells us about the program overall. What we do know from the lab results is that when McAfee is faced with real-world threats (not simulators) it can detect and block most of them from behavior alone, and that's what really matters.

McAfee AntiVirus Plus is a decent malware detector and we love the live chat support, but it's relatively expensive, especially when you can get some of its best features (WebAdvisor, the mobile apps) for free.