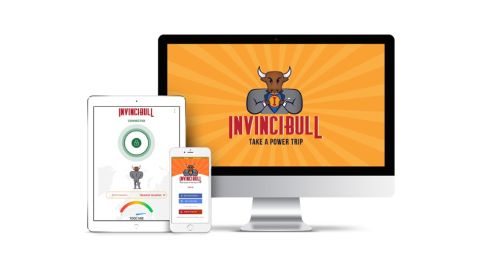 This VPN is nothing special - it's little more than Avira's Phantom VPN with a new interface - but it's easy to use, reasonably speedy, and the 1GB/ month free plan might be useful for some.

InvinciBull is a new, improved, rebranded and relaunched version of Finjan Mobile's VitalSecurity VPN, a virtual private network with its own (optional) secure mobile browser.

The InvinciBull website is clearly targeted at the novice user. There's no technical talk of protocols, or routers, not even a mention of server numbers or locations. Instead, you get plenty of graphics of InvinciBull's mascot, Vince, a cartoon bull, along with a bunch of bull-related puns: it's 'unhack-a-bull', 'untrack-a-bull', and - you get the idea.

Look past the TunnelBear-like humor and you'll find InvinciBull is powered by Avira's PhantomVPN. You get access to 38 locations across 27 countries (that's 12 locations in the US, 1 each everywhere else), with P2P support, and simple apps for Windows, Mac, iOS and Android.

As with PhantomVPN, there are no artificial limits on the number of connections or devices it can handle at one time. You can set it up and use it wherever you like. (That's not quite as impressive as it could be, because there's no support for manually setting up the service on smart TVs, games consoles or other platforms. Still, it's better than most of the competition.)

InvinciBull improves on PhantomVPN in several ways, starting with its free plan. This doesn't allow you to choose another location, a major restriction (you're automatically connected to the nearest server), but InvinciBull's 1GB/ month data allowance is twice the miserable 500MB you'll get from Avira. There are better free allowances around - Windscribe gives you up to 10GB a month - but it's enough to protect a few quick online sessions, and gives you an easy way to sample the service.

Prices are lower, too. A one-off month is a reasonable $8 with InvinciBull, but $10 with Phantom VPN. Choose InvinciBull's annual plan and the price falls to $4.99.

Mobile users also get a custom secure browser. Features include logon via a custom passcode or biometric authentication. Banners tell you whether pages are safe, suspect or dangerous. There's detailed information on trackers, and the browser can block both trackers and ads. You can do much the same with other tools and browser extensions, but these are benefits worth having, and the browser is a more interesting extra than you'll get with most VPN plans.

Don't expect much in the way of support, though. The website replaces the usual lengthy tutorials with a brief FAQ page, and there's no live chat: just a web contact form. InvinciBull's target novice users might not be the type to wade through lengthy troubleshooting pages, anyway, but we would still like to see a little more online advice.

While most VPNs love to boast about their no-logging credentials, InvinciBull pays surprisingly little attention to the issue, and it takes some work to find any details at all.

The front page of the website doesn't address logging, for instance. It's the same with the FAQs page. The first mention we found, on a Support page, was a brief response to the question 'Do you log my data?': 'We log email addresses and usernames, that's it.'

The post had a link to a Privacy Statement, which did contain the sort of detail we were looking for. But it said the InvinciBull app was covered by a separate statement. (The document didn’t link to this, of course.)

We headed off to the App Store, tried following the privacy policy link, but the page no longer existed. So, we tried Google Play and finally reached an App Privacy Statement. It really shouldn't be that difficult to find such an important document.

Our efforts turned out to be worthwhile, though, because although InvinciBull states 'we do not track the sites you visit or your activities on sites using the App', there is a lot of lesser logging.

The service tracks the date of every session, for instance; the amount of data you use, and the name and type of the device used.

If you use the app's Safe Scan feature, it sends every URL you visit back to the company to determine whether it's been identified as malicious. The company says that information is retained, but not associated with your account, so no-one will be able to see the sites you've accessed.

InvinciBull says none of this information is associated with any personal details, so this seems to have less privacy impact than the session logging you'll sometimes see with other VPNs (session dates and times, incoming and outgoing IP addresses.) Still, there's more logging than we expected, and as with many VPNs, you're left to trust that InvinciBull is living up to its privacy promises. We have no reason to doubt the company, but we would be happier if it followed providers like TunnelBear and VyprVPN, and had a public privacy and security audit of its systems.

InvinciBull's Windows client has a basic but familiar interface. Its simple main window displays your preferred location and a 'Secure My Connection' button to get you connected. Tapping the country name displays a list of other locations, with latency figures to help you judge their speed and distance. And that's all you need to know, at least for basic use. Even total VPN newbies can be up and running in under 60 seconds.

Experienced types might head off to the Settings panel, where they'll find a handful of useful options. There are no low-level technical tweaks - you can't change protocol (it's OpenVPN-only), tweak encryption or DNS - but the client does have a couple of major benefits. You can opt to automatically connect to InvinciBull whenever you access wifi networks, and a kill switch aims to automatically block internet traffic if the VPN connection drops.

Unlike the mobile versions, InvinciBull desktop apps do not automatically update.   The existing version must be removed first to ensure there are no conflicts with the new release. This is done when you download and run the installer of the new version of the InvinciBull app for Windows or Mac. That's easy enough for users to do, but it's an inconvenience, and could mean it takes longer for you to install an important update.

InvinciBull's Android app is easy to use, with a very similar interface to its desktop cousin. It's auto-protect feature is a little smarter, asking you whether to trust new wifi networks or not, then automatically connecting to the service later. There's no built-in kill switch, but you can set that up manually in Android's settings.

You also get InvinciBull's own secure browser. This works much like any other, but has built-in privacy and security features, including ratings for website safety and blocking of ads and trackers.

The Windows and Android apps aren't exactly feature-packed, and experienced users might wish they had more control. InvinciBull does a reasonable job for its target audience of VPN newcomers, though, covering the basics while being easy to learn and use.

We like to see VPN apps keep users properly up to date on their status, with clear notifications saying when you're protected, and when you're not. So, we were a little disappointed to see the InvinciBull Windows client didn't raise any notifications in normal use. If you don't happen to be looking at the client interface, maybe because you're running a full-screen application, you won't know what's going on.

The client immediately won us back with its kill switch performance, though. Not only did it detect a dropped connection and block our internet access, it also displayed an alert to warn of us the situation, with buttons to either reconnect the VPN, or disable the kill switch and restore internet access. That's a great result, and fits well with InvinciBull's focus on VPN newbies: users don't need to fully understand the significance of a kill switch or what it's doing, but it keeps them protected regardless, while making it clear that's happening and what to do next.

There was more positive privacy news when multiple test sites showed InvinciBull's Windows client had no DNS leaks, at all.

The service didn't score as highly for website unblocking. We were able to browse a few sites, including US YouTube, but better defended services including BBC iPlayer and US Netflix remained out of bounds.

Our final performance tests began with UK speeds of 55-60Mbps, a few percentage points below average, but unless you're downloading terabytes of data, you're unlikely to notice. US performance was a capable 45-50Mbps, Australia and Singapore both averaged 18-22Mbps, and although the Indian server lagged far behind, its 10Mbs was still usable for simple tasks.

InvinciBull is really just a different shell for Avira's Phantom VPN, and although it's not a bad service, it's hard to see why you would pay for it. Take a look at the free service, if you're curious, but keep in mind that you can't choose your location - the app automatically selects your nearest server.

(ed: note that the paid subscription to the service does allow users to choose locations)